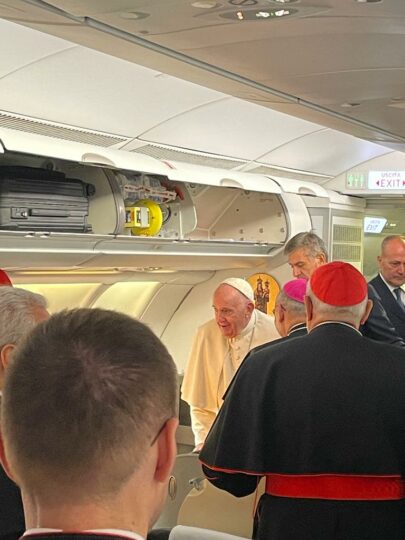 Pope Francis on plane to Kazakhstan

Pope Francis is leaving for a three-day trip to Kazakhstan, where he will attend an international religious meeting.

The head of the Catholic Church flies out from Rome early Tuesday.

After landing in the Kazakh capital Nur-Sultan, a reception with President Kassym-Jomart Tokayev and diplomats is planned.

For the 85-year-old pontiff, who suffers from knee problems and spends most of his time in a wheelchair, it will be his third trip abroad in 2022, following trips to Malta and Canada.

In the capital Nur-Sultan, which was called Astana until 2019, the so-called Congress of Leaders of World and Traditional Religions is due to take place for the seventh time.

For the first time, a pope is also taking part in the gathering organised by the Kazakh government.

On the first day of the congress, Wednesday, a joint prayer and bilateral meetings are on the agenda.

On Thursday, a final statement by the religious leaders is to be read, then his return flight is scheduled.

A meeting with Russian Orthodox Patriarch Kirill of Moscow, which the Vatican had hoped for, will not take place.

The Russian religious leader, who has always defended the war launched by President Vladimir Putin in Ukraine, will not be travelling to Nur-Sultan.