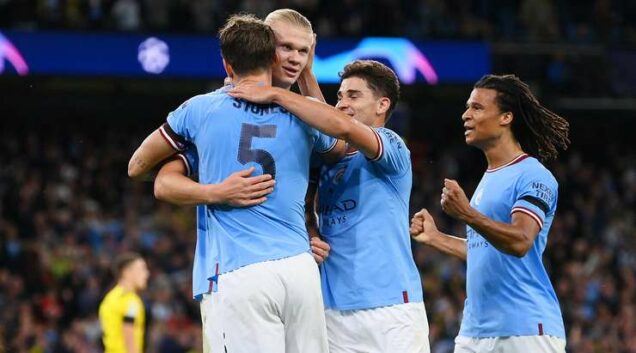 Erling Haaland broke his former club, Dortmund’s heart on Wednesday as he hit the winner for Manchester City at the Etihad Stadium in a champions league match.

After a goalless first half, the visitors shocked City, opening scoring on 56th minute.

Haaland almost equalised for City on 66th minute, as he gathered the ball inside the box and produced a snap shot. The ball only rattled the right post.
The homers got the desired equaliser on 80th minute through John Stones, as he took a great first touch to control a killer pass on the edge of the box and coolly slotted the ball into the middle of the net.
Four minutes later, Haaland hurt his former club, producing the winner and all three points for City.
Joao Cancelo played a terrific cross over to Haaland, who found some space inside the box and put the ball into the back of the net to send the capacity crowd at the Etihad into a frenzy celebration.
Tags:   Dortmund   Erling Haaland   Manchester City