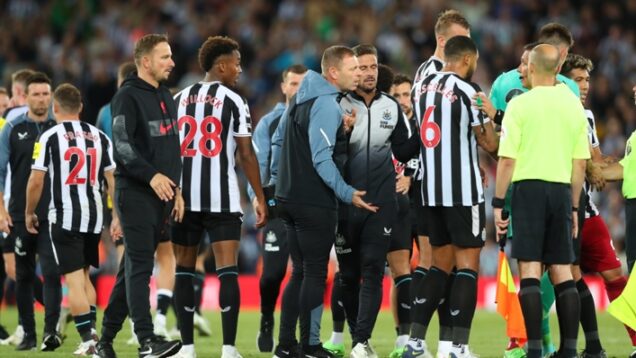 Newcastle United's players confront the officials after their loss to Liverpool

The backroom teams of Liverpool and Newcastle United have been found guilty of breaching FA Rule E3 following an altercation at the end of last month’s Premier League meeting at Anfield.

Therefore both backroom teams have been issued touchline bans.

Newcastle came close to taking a point from their trip to Liverpool on August 31, only for Fabio Carvalho to score a 98th-minute winner, sparking a touchline fracas.

At the end of a highly charged affair, Newcastle sports scientist Daniel Hodges appeared to throw a bottle into the Liverpool technical area, prompting the Football Association (FA) to investigate.

The FA subsequently brought charges against both Hodges and Liverpool goalkeeping coach John Achterberg, and it has now been confirmed the men will serve one-match touchline bans.

A statement released on Thursday said: “Coaches from Liverpool FC and Newcastle United FC have been banned, fined and warned for breaching FA Rule E3 during their Premier League game on Wednesday 31 August 2022.

“John Achterberg and Daniel Hodges both admitted that their behaviour during the 98th minute was improper, and the Liverpool FC coach also accepted that he used abusive and insulting gestures.

“An independent Regulatory Commission has fined the Liverpool FC and Newcastle United FC coaches £7,000 and £6,000 respectively, banned them from the touchline for one fixture, and warned them as to their future conduct.”