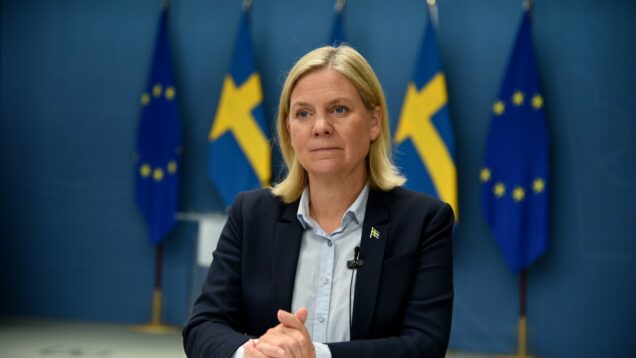 This is despite the final tally being yet to be announced.

She told a press conference on Thursday that it was now up to the Riksdag and the Speaker of Parliament, Andreas Norlén, to oversee the process of Sweden’s new government.

She also told Norlén that her door remained open to her conservative challenger, Ulf Kristersson, if he changed his mind and decided to work with her Social Democrats instead of the far-right Sweden Democrats, a populist anti-immigrant party that saw a surge in support.

Meanwhile, the final count from Sunday’s voting had not yet been made known.

However, with 99.9 per cent of votes from all 6,578 voting districts counted, the four-party alliance led by Moderate party chief Kristersson was set to take 176 legislative seats, to 173 for Andersson’s four-party left-leaning bloc.

A party or bloc needs 175 seats for a majority in the Swedish legislature.

Norlén said he was pressing ahead with the next steps in the process of forming a government.

After the weekend, he was due to talk with representatives of the eight parliamentary parties.

He said as the result was so narrow and the final result was not in yet, it was appropriate to wait.

Kristersson was expected to receive the mandate to form a new government.

Andersson would lead an interim government until a new government was in place.

Representatives from the four parties of the conservative-right bloc already met on Thursday for negotiations, according to a report in Aftonbladet newspaper, saying they aim to agree on a basis for a government within ten days.

After the last parliamentary election in 2018, it took 134 days before a government was formed under Social Democrat Stefan Löfven, Andersson’s predecessor from the same party.