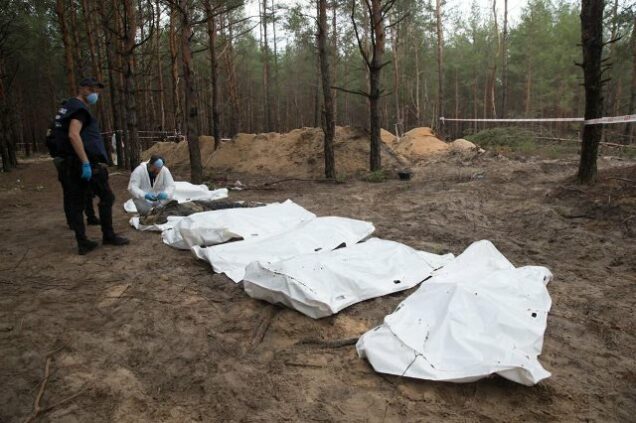 Some of the bodies discovered in the mass graves

The United States President, Joe Biden and France’s President, Emmanuel Macron have expressed outrage at the discovery of mass graves with 440 Ukrainians in the city of Izium.

Izium is located in the recently liberated Kharkiv region by Ukrainian forces.

Biden warned Russian President Vladimir Putin against escalating the fighting in Ukraine, saying that there will be consequences if the Kremlin uses chemical or nuclear weapons.

“Don’t. Don’t. Don’t. It would change the face of war unlike anything since World War II,” Biden said during a 60 Minutes interview.

US Secretary of State, Antony Blinken, said the reports of a mass grave with 440 men, women, and children in Izium, Ukraine were heartbreaking and should galvanize “our support to the brave Ukrainians seeking to liberate their homeland. We stand with Ukraine in pursuing accountability for these crimes.”

France president, Macron said “I condemn in the strongest possible terms the atrocities committed at Izium in Ukraine under the Russian occupation.

“The perpetrators will be held responsible for their actions. There is no peace without justice.”

Earlier, Ukrainian officials said that at least 440 graves had been discovered at a mass burial site in the city of Izium.

Zelensky said some bodies had “signs of torture,” while the governor of the Kharkiv region claimed that “99% show signs of violent death,” adding “there are several bodies with their hands tied behind their backs, and one person is buried with a rope around his neck.”

Zelensky added that “Russia is a terrorist country. Why is the world slow to recognize this fact? We freed Raisin and discovered more than 400 graves in the forest next to it.

“The number of tortured Ukrainians buried there is currently unknown… How many more of our people must die so that everything becomes clear to everyone?”

A United Nations source said a team will be going to Izium and the surrounding areas soon, and the war crimes investigation team may follow afterward.