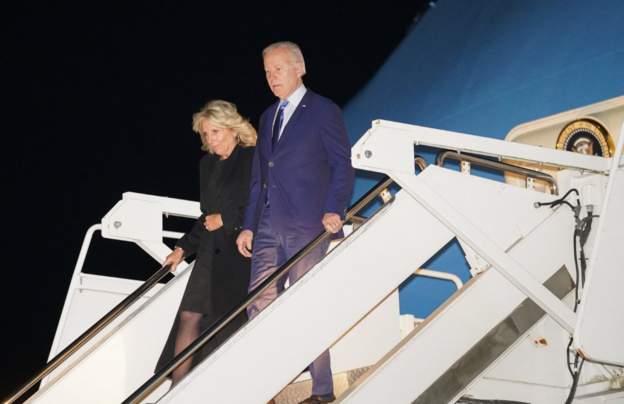 The presidential plane Air Force One touched down with Biden and his wife Dr Jill the First Lady, on board.

The president had departed US with his wife earlier ahead of the funeral.

The couple waved as they left Joint Base Andrews in Maryland and boarded Air Force One.

In their last recorded meeting, the Bidens joined the Queen last year at Windsor Castle, where they observed a guard of honour and enjoyed afternoon tea.

Also in the UK is Canadian Prime Minister Justin Trudeau, alongside his wife, Sophie.

Among the many mourners to have visited the Queen’s lying-in-state at Westminster Hall earlier was Canadian.

BBC reports that Trudeau is in London ahead of the Queen’s funeral on Monday, which he will attend alongside some 500 heads of state and foreign dignitaries.

Trudeau also signed the book of condolence for the Queen at Lancaster House.

In a tweet, he said: “Her Majesty Queen Elizabeth II served for her entire life, and bore the weight of her duties with impeccable grace.

“Sophie and I are in London for Her Majesty’s funeral – and today, we marked the solemn occasion by signing the book of condolences.”