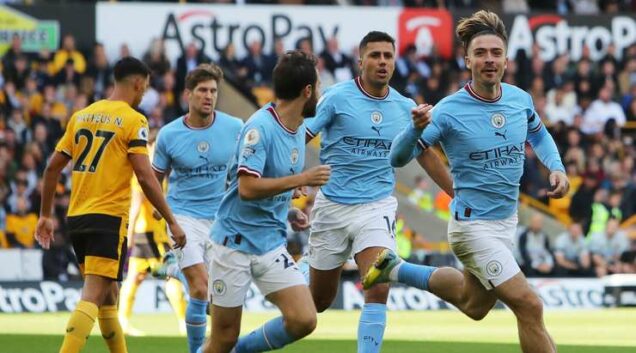 Grealish scored his first goal of the season

Manchester City thrashed Wolves 0-3 away from home on Saturday to move top of the English Premier League.

Arsenal will reclaim top spot on Sunday if they beat Brentford away from home, but now, City are on top after a convincing win over 10-man Wolves.

The visitors scored in just the first minute of the game from Jack Grealish.

Kevin De Bruyne played the ball into the box, and Grealish got on the end of the cross to put it into the back of the net.

Erling Haaland scored the second goal for City and his 11th premier league goal of the season in just seven matches.

He received a nice pass just outside the penalty area, controlled the ball and released a powerful shot which was also precise enough to beat the goalkeeper, ending in the bottom left corner on 16th minute.

Things got worse for Wolves on 33 minutes when Nathan Michael Collins was sent off by the referee for a disgraceful tackle that simply has no place in football.

The visitors added the third goal on 69th minute from Phil Foden.

Kevin De Bruyne had teed up Phil Foden inside the box, and he kept his cool to find the bottom left corner.