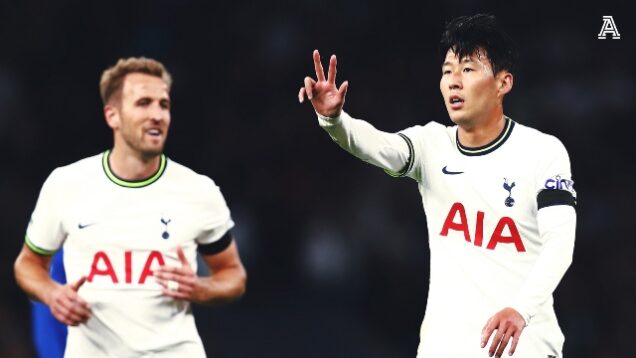 Son celebrates his hat-trick with Kane

Leicester are condemned to the bottom of the table, winless in seven matches so far, only drawing one.

The visitors had opened scoring from the penalty spot on six minutes through Youri Tielemans, but Harry Kane hit back for the homers two minutes later.

Dejan Kulusevski put the ball on a plate for Kane, who had an easy finish with a header into an empty net.

Tottenham hit a second goal on 21st minute. Ivan Perisic sent in a great cross from the corner, finding Eric Dier, who outjumped the defence to finish into the top right corner with a header.

Leicester equalised on 41st minute after Timothy Castagne sent a precise lofted cross into the box. James Maddison latched on to it and finished with a quick shot inside the left post.

Rodrigo Bentancur made it 3-2 for the homers two minutes into the second half, getting to the ball on the edge of the box after a huge mistake by an opponent and slammed it into the back of the net.

Son, who came in as substitute on 59th minutes scored the fourth goal for his team on 73rd minute. He wove his way past opponents, and he unleashed a magnificent effort from the edge of the box into the top right corner.

Son got his brace on 84th minute after collecting a pass and without hesitation fired an unstoppable shot inside the left post for a great goal.

He got his hat-trick three minutes later to make it 6-2 for Tottenham.

Pierre-Emile Hojbjerg laid the ball off to Son, who slotted it into the back of the net from close range, leaving the goalkeeper helpless.