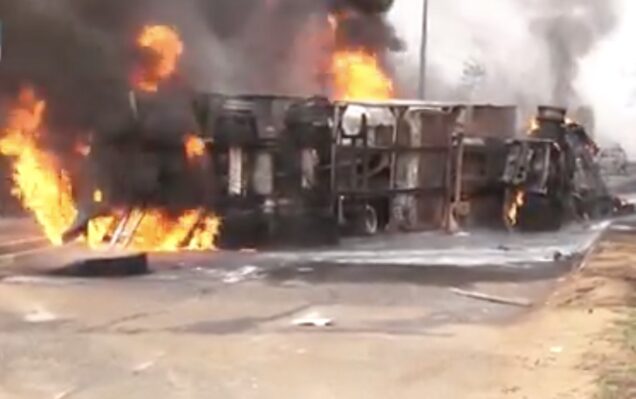 The Federal Road Safety Corps (FRSC) said that a petroleum-laden tanker burst into flames in Badeggi village, along the Bida-Lapai road in the Bida Local Government Area of Niger.

Mr Kumar Tsukwam, the state Sector Commander, confirmed on Sunday that the incident occurred at about 7:30 pm on Saturday.

Tsukwam said that the tanker was conveying PMS to Abuja, adding that “while in motion, the tanker started leaking”.

“The driver parked and tried to fix the leakage.” A fire from a tea shop ignited, followed the trail of the leakage and set the tanker ablaze, as well as two other articulated vehicles.

Four people were involved in the incident, but they were all unhurt.

He explained that the men of FRSC RS7.24 Bida, fire service personnel, and other security agencies were at the scene managing the situation.

Meanwhile, the sector commander advised drivers of articulated vehicles to always ensure the safety of their vehicles while on the roads to avoid unnecessary crashes.