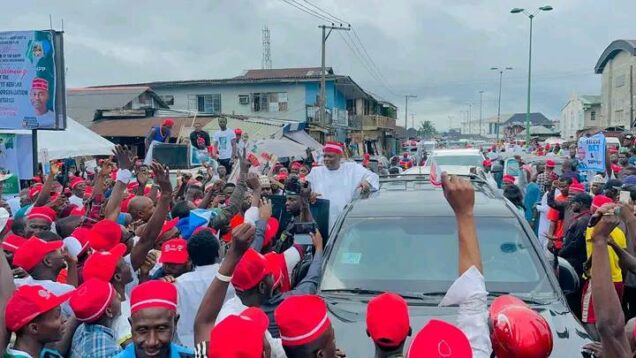 The Presidential candidate of the New Nigerian People’s Party (NNPP), Dr Rabiu Kwankwaso, has inaugurated the Delta South Senatorial candidate’s campaign office in Warri ahead of the 2023 general elections.

The NNPP presidential candidate noted that the official campaign had not started.

He said that the large turnout of party faithful to welcome him in Warri attested to the popularity of Commodore Nesiama and the party.

Kwankwaso and his entourage were earlier received by Commodore Nesiama and other party faithful at the Osubi Airstrip in Okpe Local Government Area.

Before the arrival of Kwankwaso, scores of party supporters had dumped their engagements for NNPP during a “Hope Walk” on Saturday.

The hope walk was organised by Nesiama’s Campaign Organisation as part of the activities lined up for the arrival of Kwankwaso and inaugurating the Delta South Senatorial office of Commodore Nesiama.

The movement began from McDermott Junction in Igbudu community and traversed Deco Junction, Okumagba Avenue, Estate, Okere Market and terminated at the secretariat of the Nesiama’s campaign office at Odion Road.

The party faithful said they were tired of failed promises and that their “former parties were not carrying them along in the scheme of things.”

Addressing them, Nesiama urged the people to have their Permanent Voters Card (PVC), noting that the card was the tool for them to elect candidates of their choice in the forthcoming general elections.

While noting that elections were not a do-or-die contest, Nesiama stressed that the hope of the people had been rekindled with the presence of people like him in the race.

“The movement is to sensitize the people to the need for them to collect their PVCs because, without the card, you can not vote. In other words, you have forfeited your rights to decide on who you want.

“I encourage people to replicate the zeal they displayed during the voters’ registration in the collection of their PVCs. They should protect their vote and ensure it counts.

“The people of Delta South have moved out to show that they love the Commodore of hope, they love the NNPP coming with new possibilities for them.

“That is the joyful thing. I am elated. I am overwhelmed and I thank God for that opportunity and for the impetus to do more.

“It’s obvious with the turn out of people that nobody was hired. Nobody was bought. People came out en masse to support this movement,” Nesiama said.