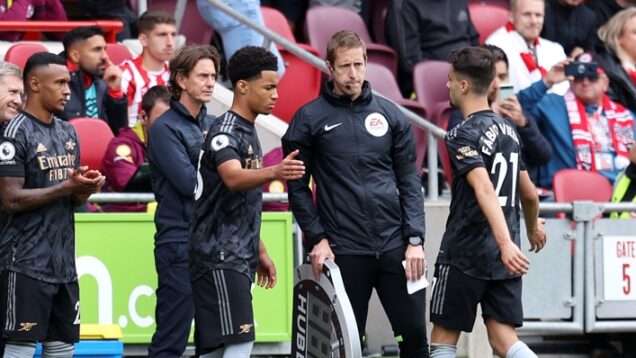 Ethan Nwaneri comes on for Fabio Vieira at Brentford

Ethan Nwaneri of Nigerian descent made history for Arsenal at Brentford as he became the youngest player to appear in the Premier League after his second-half introduction on Sunday.

Mikel Arteta’s side were without Martin Odegaard and Oleksandr Zinchenko for the trip to Brentford Community Stadium, with youngsters Nwaneri and Lino Sousa, named on the bench.

William Saliba and Gabriel Jesus headed in first-half to put Arsenal in control before Fabio Vieira marked his first Premier League start with a superb strike after the interval.

With four minutes of injury time added, Arteta sent on Nwaneri to replace Vieira as the 15-year-old etched his name into Premier League history.

The midfielder, aged just 15 years and 181 days, became the youngest player to feature in a Premier League match.

He joined up with Arsenal at age 9 and by the age of 14, he was already playing for Arsenal’s under-18 side.

The midfielder started the 2022–23 season playing for Arsenal under-18s but he performed so well that he was promoted to the Arsenal under-21s.

He joined the Arsenal first team for training in September and made his first Arsenal Premier League match day squad on 18 September for the match against Brentford, and was then included among the match day substitutes for Arsenal.

Nwaneri currently represents the England U-16s but there is still a possibility of him playing for Nigeria.