Real Madrid return to LaLiga summit with win over Atletico 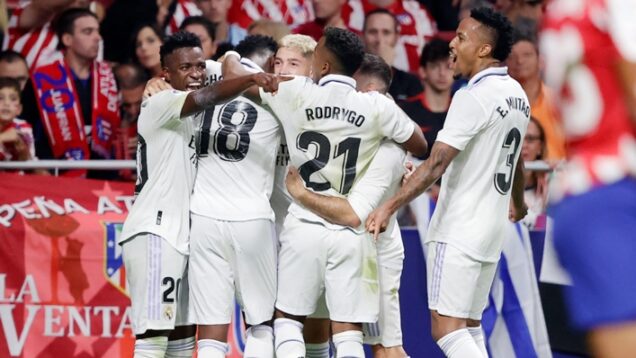 Real Madrid returned to the summit of LaLiga by beating neighbors Atletico Madrid 2-1 in a full-throttle derby.

Racist chanting in reference to Vinicius Junior from a large group of Atleti fans outside the Civitas Metropolitano soured Sunday’s meeting before kick-off, but Carlo Ancelotti’s team delivered the perfect rebuttal on the pitch.

An improved second-half display from Atleti led to an 83rd-minute goal from substitute Mario Hermoso, who was then sent off as Madrid held firm to make it nine wins from nine in all competitions this season.

Atleti defender Felipe had the first chance in the sixth minute, heading over from Rodrigo de Paul’s free-kick.

Yannick Carrasco scored the winner in the last meeting between the great rivals and had a shot deflected wide at the culmination of an excellent run – Joao Felix seeing a shot blocked from the resultant corner.

Yet with their first shot, Madrid struck in the 18th minute, Rodrygo poking home from a delightful one-two with Tchouameni, whose sublime, lofted pass evaded Felipe.

Antoine Griezmann drew a fine save out of Thibaut Courtois as Atleti searched for an equalizer, but Madrid were in complete control when Valverde expertly steered home from a tight angle after Vinicius hit the post.

Despite Courtois saving from Carrasco before the interval, Madrid kept Atleti at arm’s length after the restart, and Simeone turned to Matheus Cunha and Alvaro Morata around the hour.

Yet it was a defender who came on to set up a grandstand finale – Courtois flapping at a corner and Hermoso turning the ball home off his shoulder.

Atleti’s comeback hopes were dashed, though, when Hermoso harshly received a second booking for shoving Dani Ceballos at a corner, two minutes after receiving a caution for dissent.

What does it mean? Two-horse race looking likely

Diego Simeone was overseeing his 408th LaLiga match, making him the Atleti head coach with the most games managed in the competition, overtaking Luis Aragones. Yet once they had gone behind, Atleti never looked likely to mark Simeone’s milestone with a victory, meaning his LaLiga record as their boss now stands at 247 wins, 95 draws and 65 defeats.

In the grand scheme of things, however, Sunday’s match merely proved the gulf in quality that has developed between the city rivals since Atleti won LaLiga in 2020.

Bar one lapse in concentration for Hermoso’s goal, Los Blancos, the only team in Europe’s top five leagues with a 100 percent record this season, was a class above as they claimed a 91st LaLiga triumph over Atleti and with eight points the gap between them and Madrid, it already looks as though it will be between the reigning champions and Barcelona (second, two points behind Ancelotti’s team) for the title.

Rodrygo and Valverde on a roll

Filling in for the injured Karim Benzema, Rodrygo was immense, and he has now contributed to five goals in his last four games in LaLiga (scoring three times and providing two assists).

Valverde, meanwhile, continues to see his star rise. The 24-year-old midfielder has been involved in seven goals in his last 10 Madrid appearances in all competitions, as many as in his previous 95 Los Blanco appearances combined. His finish might not have matched the stunning strike he planted in from long distance against Mallorca or his superb, curling goal against RB Leipzig in midweek, but it required great composure, not to mention the energy and pace to get there in the first place.

Football has united behind Vinicius after a Spanish agent seemingly used a racial slur against the Madrid star on an appearance on El Chiringuito. Unfortunately, despite Atleti’s president Enrique Cerezo having issued his support of Vinicius in the build-up to the match, a large portion of home fans were recorded singing a racist chant directed at the 22-year-old prior to kick-off.

Seemingly in response, Atleti tweeted “Countdown to the derby. Support Atleti with passion and respect to the rival!”. However, in a tense atmosphere, Vinicius showed his defiance to the abuse while celebrating Rodrygo’s opener, joining his compatriot in dancing down on the touchline.

Vinicius did not just offer up defiance with his celebration, though. His part in Madrid’s second was brilliant; a trademark, cutting run in from the left and, while his finish lacked precision, Valverde was on hand to score his third goal in as many matches.