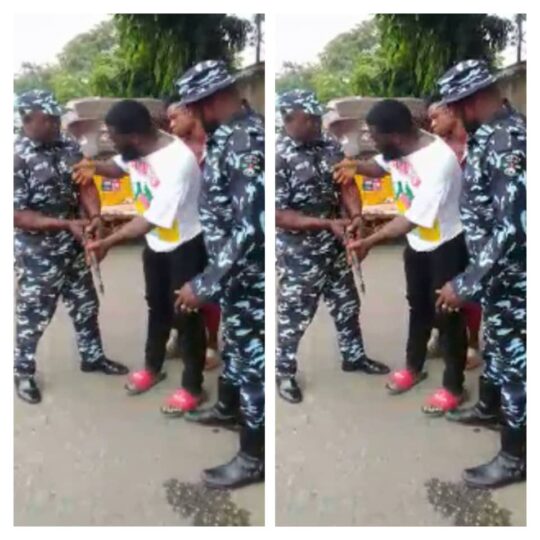 The men dragging gun with policemen

Two men at have been caught on video assaulting two policemen, seeking to collect gun from one of them forcefully.

The policeman, not wanting to shoot was seen trying to protect his gun while one of the men struggled to collect the gun from him.

The incident occurred at Meiran area of Lagos, Southwest Nigeria.

The Lagos State Police Command has reacted to the viral video.

Spokesperson of the Command, Benjamin Hundeyin said the two men have been arrested and that they would be prosecuted.

“The incident happened at Meiran. These two have been arrested and detained. I will provide further updates,” he said.

Reacting to this, Force Public Relations Officer, Muyiwa Adejobi said: “Those are the people you sent to the police. They are not from IGPs family or his children, but from your communities and different families, so allow police to recruit those that are capable to police Nigeria, until we have proper recruitment exercises, this is how it will be.”