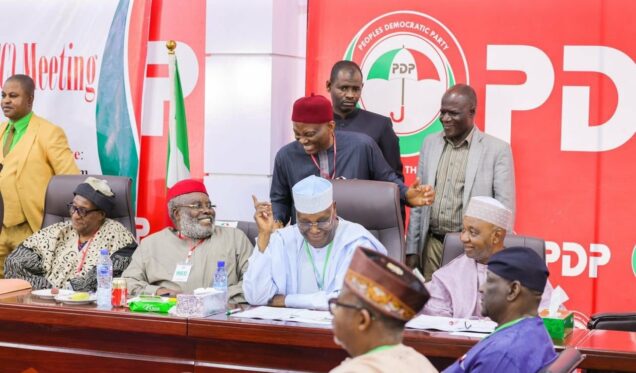 Sen. Adolphus Wabara, the acting chairman of Peoples Democratic Party (PDP) Board of Trustees and other members will meet Governor Samuel Ortom and Governor Ahmadu Fintiri of Benue and Adamawa States respectively as part of efforts to reconcile aggrieved members and stakeholders ahead of the 2023 general elections.

Wabara who confirmed this on Sunday however said it is too early to say if the BoT is making progress in its efforts to reconcile PDP members.

Some members of the party led by Governor Nyesom Wike had insisted that Iyorcha Ayu, the chairman of PDP must vacate office after the emergence of Atiku Abubakar who is from the South like him as the presidential candidate of the party.

The aggrieved PDP members want a Southerner as the chairman of the party.

But Ayu, backed by Atiku and other members of the party had insisted that he will run out his four year tenure.

Wabara was saddled with the task of finding a common ground among contenders in the dispute now threatening the 2023 ambitions of PDP.

Giving a status of that effort on Sunday, Wabara said, “We will be going to Adamawa State tomorrow (today) to meet with Governor Fintiri and from there we will meet with Governor Ortom. I am on the road now to meet with Prof Jerry Gana. We are trying our best to ensure that peace is achieved and victory will be ours in 2023.

“We will soothe aggrieved nerves and come with something that will be acceptable to everyone.”

“After we met with the governor of Oyo State, Seyi Makinde, I won’t say we are making progress, but we are talking to our governors and the parties concerned.

“We should give and take, and pacify, but because I have not reported to the BoT members, I can’t make a categorical statement. We have to talk to our members and whatever we come up with will be the position of the BoT”, he added.