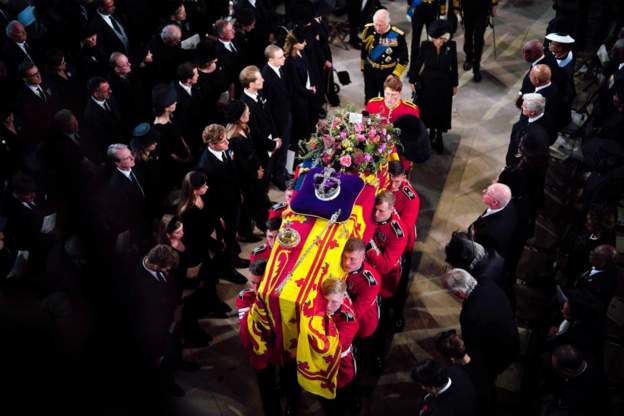 The remains of Queen Elizabeth II were buried in the Royal Vault at St. George’s Chapel in Windsor Castle on Monday evening.

It was a private burial. The private service was conducted by the Dean of Windsor, Right Reverend David Connor and attended by the King and the royal family.

Details of the service was not disclosed, with Buckingham Palace calling it a “deeply personal family occasion”.

The event was not televised and the media were not present at the burial.

The Queen’s coffin was laid to rest at St George’s chapel, alongside Prince Phillip and her parents, King George VI and the Queen Mother.

Earlier at the Committal Service attended by 800 people, Queen Elizabeth’s coffin was lowered into the royal vault awaiting the private burial by the royal family.

During the committal service, the crown jewels were taken from it, and a ceremonial wand of office broken and put in their place.

Earlier, huge crowds lined the route taken by the state hearse as it made its way from London to Windsor, with flowers thrown in its path.

On Monday morning, a state funeral service was held at Westminster Abbey – the building in which the Queen was married, and crowned.

The funeral service was attended by about 2,000 people including world leaders.

During his sermon, the Archbishop of Canterbury said the late Queen touched “a multitude of lives” during her 70-year reign.