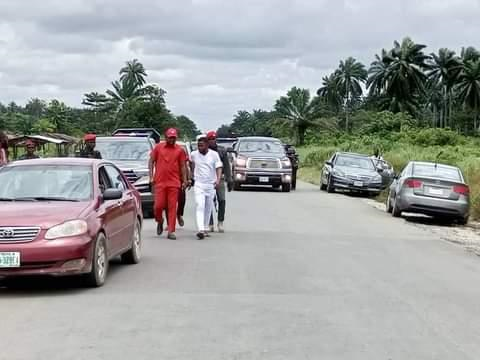 Four among the seven passengers kidnapped on Saturday, September 17, along the Emohua-Kalabari road in Rivers State have regained the freedom.

But it was learnt that the remaining passengers are still in captivity of their abductors.

During a phone interview,the Spokesperson of the Rivers State Police Command, SP Grace Iringe-Koko confirmed the release of four of the abducted passengers.

She added that the passengers were freed between yesterday and in the early hours of today, Tuesday, September 20.

She also confirmed that the driver of the vehicle was set free by the kidnappers on Saturday,the day of the incident in an unclear circumstances.

But she said none of the passengers had so far been debriefed by the Police since they regained their freedom.

However, she told our correspondent that the Commissioner of Police Rivers,CP Eboka Friday, has directed the Deputy Commissioner of Police, Operations, DCP Muhammed Shehu, to lead a tactical team of Anti-kidnapping units to secure that axis that has been notorious for the recurrent hijacking of Commuters.

Iringe-Koko further stated the CP has advised the Chairmen of four local government areas of Emohua, Akuku-Toru, Asari-Toru and Degema to synergize with Police to secure the road for ease of Commuters.

Meanwhile, the Chairmen of the affected local government areas linked by the Emohua-Kalabari road; Emohua, Akuku-Toru,Asari-Toru, Degema and respectively have renewed collaborative efforts to curb the menace.

While speaking on behalf of his colleagues after the inspection of the flashpoints as well as getaway points, used by the criminal elements, Lloyd reaffirmed their commitment to make the areas safe for commuters.

He said the incessant spate of criminality along the road had become very embarrassing and worrisome to the Chairmen, who had resolved to take full charge of the situation, in order to bring reprieve to their people.

Dr. Lloyd disclosed further that in the interim, the Chairmen had resolved to enhance visibility along the road, by clearing the bush parts on both sides and build security beats at strategic locations.

On his part, the Deputy Commissioner of Police (Operations) in Rivers State, DCP Muhammed Shehu assured that having identified the escape routes, used by the kidnappers, the security agents would do the needful to safeguard the people of the affected areas.

He added that the joint operation that would be carried out in the areas would involve sister security agencies as well as the locals (vigilantes) for proper policing.

DCP Muhammed Shehu assured that the Police were on the trail of the kidnappers, while efforts were on to secure the rescue of the remaining victims.

Our Correspondent reports that at time of filing this report, earth moving equipment like, bulldozers had been mobilized to the road and were seen clearing the brushes two sides of road to allow clearer visibility for motorists.