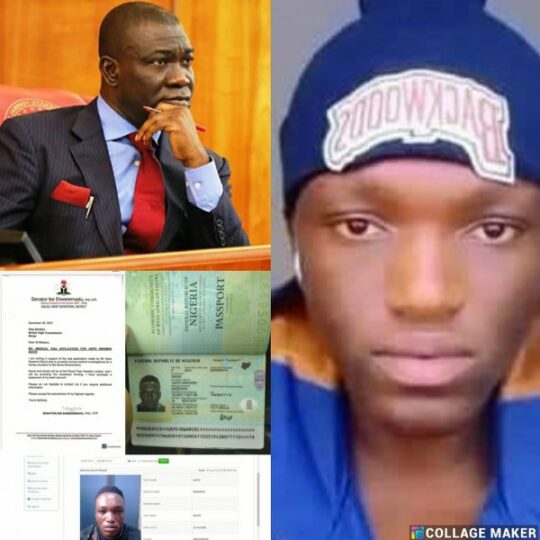 A Federal High Court, Abuja, on Tuesday, fixed Dec. 5 for ruling on an application filed by David Ukpo, the kidney donor, asking the court to set aside its orders made on July 1 and July 6 which gave Ike Ekweremadu, former Deputy Senate President, and wife, Beatrice, access to his biodata.

Justice Inyang Ekwo fixed the date after counsel for parties in the suit adopted their processes and presented their arguments.

Ukpo, through his lawyer, Bamidele Igbinedion, had filed a motion on notice marked: FHC/ABJ/CS/984/202, urging the court to set aside the orders, directing some agencies of government and banks to release his biodata to Ekweremadu and his wife.

Ukpo, who joined the Ekweremadus as applicants/respondents in the motion, also listed the National Identity Management Commission (NIMC) (1st respondent) and four others in the application.

Others mentioned in the motion are the Comptroller General (C-G), Nigeria Immigration Service (NIS); Stanbic-IBTC Bank; United Bank of Africa (UBA) and Nigeria Inter-Bank Settlement System Plc as 2nd to 5th respondents respectively, but the 5th respondent was later dropped form the charge.

Ukpo, who is currently in the United Kingdom (UK) in connection with the alleged organ harvesting charge against the Ekweremadus, had said that granting the couple’s request violated his fundamental rights to privacy guaranteed by Section 37 of 1999 Constitution (as amended).

But in a counter affidavit deposed to by Bright Ekweremadu, the immediate younger brother to the ex-deputy senate President, the applicants said Ukpo was not entitled to the reliefs sought as the law does not permit such.

The counter affidavit was dated and filed on Sept. 8 by their counsel, Adegboyega Awomolo, SAN.

In a 20-pont argument, Bright averred that though the court gave its ruling on July 1, Ukpo’s right to fair hearing was not breached.

He said that the documents which were released by the agencies and banks upon the orders of the court had been transmitted to the UK and had been “tendered at the Uxbridge Magistrate Court, and at the Central Criminal Court in the UK and have subsequently formed part of the record of the courts.”

At the resumed hearing on Tuesday, Eyitayo Falogun, SAN, who appeared for the Ekweremadus, adopted his applications and urged the court to dismiss Ukpo’s request.

He said he was aware that a coalition of civil society organisations under the auspices of the Edo Civil Society Organisation (EDOSCO), initiated the motion on Ukpo’s behalf.

Falogun, who called the attention of the court to Upko’s motion, described EDOSCO as “a meddlesome interloper.”

Muazu Dikwa, lawyer to NIMC, argued that the orders made by court on July 1 and July 6 were in line with Section 2.11 of the National Data Protection Regulation (NDPR), 2019.

According to him, the regulation says that every transmission of data to a foreign land shall be done under the supervision of the Attorney-General of the Federation (AGF).

He, therefore, prayed the court to dismiss Ukpo’s application.

Lawyers representing other respondents also asked the court to discountenance the motion.

But counsel for Ukpo, Bamidele Igbinedion, disagreed with their submission.

He said that contrary to Dikwa’s argument, “Sections 2.2 and 2.3 of the NDPR requires that if anyone applies for another person’s biodata, one must put the subject person on notice that there is an application for the disclosure of his or her personal information which is held by the government.”

Igbinedion argued that there was no authority given to the government to disclose the personal information of any Nigerian without putting that Nigerian on notice.

He, therefore, contended that the court did not have jurisdiction to have ordered the release of Ukpo’s biodata to the AGF for onward transmission to the UK in the first instance.

He added that the respondents, including the Ekweremadus, had not shown that the court had the statutory jurisdiction to order the disclosure of private information held by the government.

The lawyer prayed the court to grant the reliefs sought and reverse the orders.

Justice Ekwo adjourned the matter until Dec. 5 for ruling.

“What Ekweremadu sought was not public information but private information of a Nigerian citizen,” he said.

He said if the court “grants their prayers, it means that the information was obtained illegally and the UK court cannot rely on it.”

Igbinedion, who said he had urged the court in his reply on points of law to disregard Bright Ekweremadu’s averment, said Ukpo’s documents that were released had not been used in the UK court because trial has not commenced.

“We said in our reply that you don’t rely on oral evidence to tell the court about what happens in another court.

“So we urge the court to disregard that,” he said.

On June 27, Ekweremadu, who currently represents Enugu West Senatorial District, and his wife had, in an application dated and filed on June 27, sued NIMC and four others following the criminal charge filed against them in the UK.

They had sought the order of the court directing all the respondents to release to them certified true copies of Ukpo’s biodata information in their care to enable them present the documents before the UK court and the judge granted the request on July 1.

He directed that the documents should be released to the AGF for onward transmission to the UK.

Besides, Ekwo also made an order on July 6, directing NIMC to release Ukpo’s information to the Ekweremadus in line with the earlier court order.