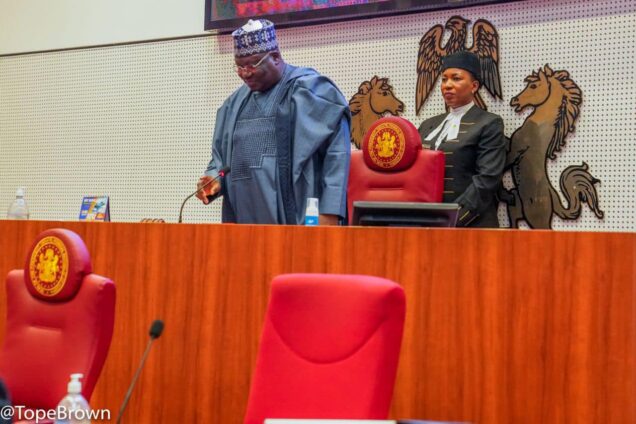 President of the Senate, Ahmad Lawan, on Tuesday, warned that unless prompt action is taken to stop crude oil theft, it will drive Nigeria’s economy into a coma.

Lawan stated this in his speech to welcome lawmakers back from the two-month recess.

While underscoring the need for an improvement in the country’s revenue earnings, Lawan said;

“Distinguished Colleagues, the Economy of our Country is still challenged. The Senate working with the House of Representatives and the Executive needs to continually seek better responses to the economic situation.

“Generation and collection of revenues have remained major challenges. Also, the massive loss of revenue through oil theft is debilitating and threatening to throw the economy into a coma.

“Revelations about the scale of oil theft show that, until Government takes decisive actions, Nigeria could soon lose any revenue from that sector.

“We must therefore work to ensure that everything is done to curtail this theft.”

Lawan also recalled that the Senate during the recess showed serious concerns about the Security situation in the country and had two engagements with the Office of the National Security Adviser, Chief of Defense Staff, Service Chiefs, Inspector General of Police, Director General of Department of State Services, Director General of Nigerian Intelligence Agency and other heads of security agencies.

He disclosed that the meeting which was held on the 5th of August and the 12th of September, 2022, was to ensure that Nigeria’s defense and Security Agencies improve on their operational strategies to secure citizens and indeed our country.

“From the assessment of the prevailing situation our security agencies are recording more successes and the situation seems to be improving”, he observed.

He added that the Senate would continue to engage defense and security agencies through its appropriate Committees, to ensure that the follow-up engagements are sustained.

The Senate president also expressed the willingness of the National Assembly to ensure transparent and credible elections next year at the polls.

According to him, the innovative amendment to the Electoral Act by the National Assembly has provided the Independent National Electoral Commission (INEC) with the wherewithal to deliver on a successful general election in 2023.

The Senate President said, “Distinguished Colleagues, the year 2023 is a momentous period for Nigeria, as elections will be held, across the Country. Nigerians are expected to exercise their franchise.

“We are ready to support INEC in all possible ways as a Legislature.