Umuchukwu or Nkerehi? Anambra community at war over name of their area 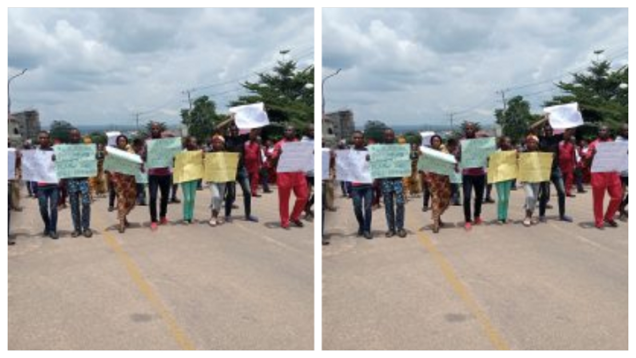 Members of a community in Orumba South Local Government Area of Anambra State are threatening war over how to refer to their area with ‘Nkerehi’ and ‘Umuchukwu’ as the two names in contention.

Some members of the community who preferred the name ‘Umuchukwu’ recently staged a protest in Anambra Government House, Awka, during which they protested against reference to their area as Nkerehi.

While addressing journalists in Awka on Tuesday, Mr Emeka Adinchzor, the President General of the town union said though the area used to be known as ‘Nkerehi’, but the name was changed to ‘Umuchukwu’ after a religious crusade 16 years ago.

He added the state government confirmed the name after a referendum in April 2007. But he said some members of the community have persisted in referring to the area as Nkerehi.

He also said some people in the community are also using the old name in burial posters, banners and other inscriptions positioned for public viewing, and have been boasting that nothing will happen to them.

He therefore called on Gov. Chukwuma Soludo and security agencies to beam searchlights on the area to avert imminent crisis.

The president general said that such actions were intended to ingnite crisis if not checked.

“Before now, we used to bear the name, Nkerehi, but after a religious crusade we held in our community about 16 years ago, we resolved to change our name to Umuchukwu.

“The process eventually led the state government to conduct a referendum for us in April 2007 which resulted in the adoption of Umuchukwu as our new name.

“Regrettably, some people, in spite of the fact that Umuchukwu is already gazetted and recognised by successive administrations, still address the community as Nkerehi.

“Some write the old name in burial posters, banners and other inscriptions positioned for public viewing, and the perpetrators even go about boasting in town that nothing will happen to them,” he said.

The community leader said if urgent action was not taken by government and security agencies, the situation might snowball into full blown communal crisis.

Adinchzor told journalists that some members of the community had recently protested in government house during which the Chief of Staff, Mr Ernest Ezeajughi, received them on behalf of the governor.

“We are using this medium to appeal once again to the state government to stop listening to those calling themselves Nkerehi Community because their actions could result into crisis, if not checked,” he said.

Ezeajughi had during the protest advised the people on the need for peace in the community.

He said that some people were promoting acts capable of slowing down development in their communities and warned that government would not fold its arms and watch such people.

The chief of staff however said the matter would be referred to the Ministry of Local Government and Chieftaincy Affairs for treatment. (NAN)