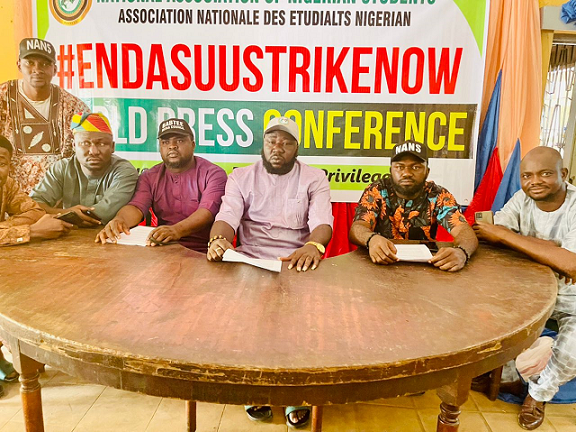 NANS vows to shutdown the country and disrupt political campaigns if FG fail to accede to the demands of the ASUU within two weeks.

The National Association of Nigerian Students (NANS) has said it would shutdown the country and disrupt political campaigns if the Federal government failed to accede to the demands of the Academic Staff Union of University (ASUU) within two weeks.

The students body gave the ultimatum at a press conference addressed by the Chairman of NANS National Taskforce on #EndASUUStrikeNow, Comrade Ojo Raymond in Abeokuta, the Ogun state capital.

The students had in separate protests grounded activities on the major highways in the country in the past one week, including the Murtala Muhammed International Airport in Lagos, on Monday in protests against ASUU strike.

The threat came as political parties are preparing for the commencement of election campaigns next week, ahead of the 2023 general elections.

NANS through the task force chairman vowed that, students would unleash their “anger and frustration” on the Federal government until public universities are reopened.

“Our blocking of access to public roads and ports is just a warning. If the government fails to conclude all the negotiation and agreement with ASUU within the frame of two weeks, they will witness more protests and rallies all over the country.

“They will also witness the annoyance, anger and frustration of Nigerians Students who have been at home for the past seven months. As we promise them that we will not allow any political campaign to hold across the country until we are back to class.

“This government has pushed so many Nigerians Students into depression. We say enough is enough; we can no longer bear the brunt from this avoidable crisis in our nation public ivory towers again”, Ojo said.

He called on Nigerians to join them in their struggle for the rescue of tertiary education from collapse.