How I was paid N3,000 for my first gig - Social media influencer, Olóyè 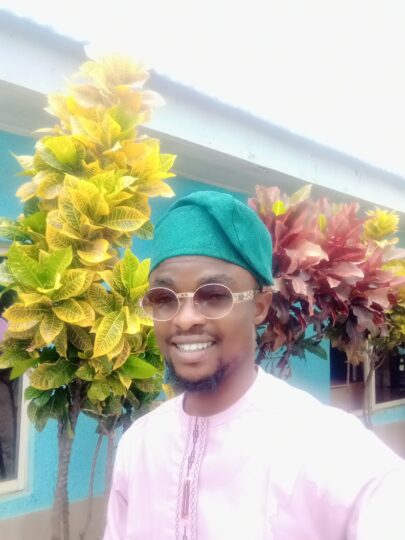 Samuel Oladimeji Edun, popularly known as Olóyè is a social media influencer and an entrepreneur. In this interview, he spoke about his growth and influence on social media, personal branding, and the 2023 elections.

Tell us about your personal brand.

I work as Growth Marketing Strategist, who empowers brands to achieve next-level success, maximize revenue, elevate brand authority, establish powerful communities, and skyrocket business growth through cutting-edge marketing strategies and results-driven social media marketing solutions. I am passionate about being Resourceful, Ethical, Meticulous, Collaborative, and Adaptable. I just want to achieve rockstar results with social media, especially Twitter. I achieve this by developing strategies that work. My motto is Work Smarter, and leave the harder strategies to those who can’t think. I live by this and teach others the same every day.

It literally started in 2020, during the COVID-19 lockdown. I noticed some set of people promotes brands and they are called influencers. I started my journey with followers train where people comment their Twitter handles or emojis, they follow everyone that likes their comments. Then, boom, I started growing.

You have remained anonymous on Twitter, how has that worked for you?

Honestly, I think it has been working well because people are eager to know the face behind Olóyè. One way or another, people want to know if Oloye is an elderly person or a young man.

Can you remember the first gig you handled?

That was in 2019, I don’t know if I should cry or laugh. The gig was for a clothing shop. The pay is what I don’t wish to remember. I collected ₦3,000 for seven posts. I thank God for today.

Tell us your educational background.

I had my elementary education in Christ Light Primary School, Lagos State in the year 1998. I then proceeded to The African Church Model College, Ifako Ijaye, Lagos State in 2005. I was later elected the Senior Boys Prefect in my final year.

I read Computer Science and Engineering at the Ladoke Akintola University of Technology popularly known as LAUTECH in 2013, where I became my department’s representative and I am currently pursuing my master’s degree in Public Administration.

Is influencing a full-time job for you?

No. At least for now.

How profitable is this profession?

I can’t really say because people make millions from influencing jobs. But I believe what matters most is branding and your strategic approach.

What is the importance of personal branding?

Essentially, it is how you project your brand and its values to the world and ensure that your target audience knows who you are, what you stand for, and why it’s worth choosing you over your competitors.

Personal branding is not just about marketing but about being your marketer. It is about standing for yourself and your business to command respect and confidence from your peers and customers.

Toxic? Hmmmm.. I wouldn’t say that. I think of social media platforms as huge palace /skyscraper with lots of rooms, corridors. It really depends on where a person hangs out and how a person personalise his or her feed. In my case, Twitter is one of the social media platforms I spend most time and where I‘ve had the opportunity to meet with great people.

I rarely check on trending topics, which are, in fact, misleading. I consider it normal, nevertheless, since anything filled with people’s emotions will have those effects. I personalise my feed by following people whom I want to learn from and I use Twitter lists.

What strategic advice do you have for up-and-coming Twitter influencers?

A person must have a brand and be creatively consistent with what he or she is comfortable with.

What is the biggest amount you earned through Twitter?

I have grown to earn what I am getting comfortable with.

Which other social media influencers do you collaborate with?

I have literally worked with most influencers in Nigeria. Moving to the rest of the world, that would be Shane Dawson.

Do you predict any shift in influencer marketing in the coming future?

Yes, The world evolves and I believe social media influence is dynamical.

What’s the biggest lesson you have learned on Twitter?

Your online friends or followers are human too. Respect is an important word on Twitter. The avatars you see on profiles represent human beings who live and breathe like you. I am very lucky to have so many people on Twitter I have been engaging for a long time. I have met some of them in real life. I respect them even more after I have had the opportunity to jump from an online conversation to a real life connection.

Use your influence for the greater good. The majority of online influencers are active on Twitter. They get the message out, and they share information on causes that need support. They make people aware of issues. Even if you are not a big influencer, you can still impact change. Every little action helps. The important step is to make the first move.

No one can bully you into doing anything. Bullying is not tolerated on Twitter, so it shouldn’t be tolerated in your personal life either. Don’t let anyone tell you that you can’t do something or try to control your actions.

Do we need a bill to checkmate the activities of social media users despite having freedom of expression?

Although I strongly believe we are free to say what we want, we are not allowed to express any opinion that offends, threatens, or insults groups, based on race, color, religion, national orientation, or disability (hate speech).

What is your advice for the youths and social media influencers on the 2023 elections?

Young people were hit hardest by the great recession. You may not care now, but you might in four years. Young voters account for half of the voting population, making them a powerful political force. Youth must stand up to the call now.