Meet three Nigerian billionaire pastors who can 'die' for Oyedepo 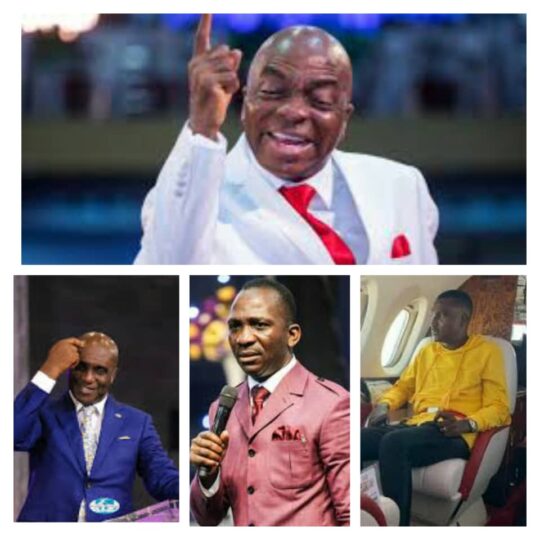 Oyedepo and his diehard disciples

The Presiding Bishop of Living Faith Worldwide (Winners Chapel), Bishop David Oyedepo, undoubtedly, is the richest pastor in the world, with a networth estimated at $200 million (Over N85 billion).

His Church was founded on the 2nd of May, 1981 in Kaduna Nigeria before it was relocated to Lagos Nigeria where it went on to become one of the biggest Church structures in the World.

Oyedepo has raised many pastors who have gone to established their ministries in different parts of the country. Some of the pastors still hold allegiance to him and will do anything to salvage his pride even if it means hurting others to do so.

Three of Oyedepo’s diehard loyalists are billionaire and have at one time or the other boasted that the could do anything to defend him. These billionaire pastors are:

Pastor David Ibiyeomie is the founder of Salvation Ministries, with its headquarters in Port Harcourt Rivers State. He is a billionaire and he is not hiding it. He owns the biggest church in Rivers. He came out of Living Faith Church under the tutelage of Oyedepo. His tongue is like the poison of an asp when it comes to defending Oyedepo. To Ibiyeomie, Oyedepo can do no wrong.

When popular On-Air Personality (OAP), Daddy Freeze attacked Oyedepo, Ibiyeomie put him where he belonged. Daddy Freeze used to chew Oyedepo in his mouth, dropping venoms on him, until Ibiyeomie came to the scene.

In a video  he released, Ibiyeomie called Daddy Freeze a bastard and threatened to kill him for “insulting” Oyedepo.

“I can’t be alive and you insult my father. The day Daddy Freeze insults Oyedepo, I will deal with him and arrest him.

“You can’t have a father and insult a father. He also said ‘no right-thinking son will sit down and watch someone insult their father,” Ibiyeomie said.

At another time in July 2022, Ibiyeomie said he would not forgive anyone who insulted Oyedepo.

“Insult me, insult my wife, I don’t care but if you take your mouth to touch my wife you are touching me. If you insult Oyedepo I will kill you; and that’s how God is. You know why? If Bishop Oyedepo was not alive my Christianity would have been nonsense.

“He made me love Christianity. Can you be alive and somebody is insulting your father? I will slap you; you are not born. Don’t you see how I tore that beast to pieces? I will tear you to pieces. I will fight you spiritually, fight you everywhere, fight you law court, till they send you to jail.

Pastor Korede Komaiya, is the Senior Pastor and founder of The Master’s Place International Church, in Warri. He is popularly called Pastor KK.

Komaiya also came out of Living Faith Church to form his own ministry. The Master’s Place International Church is one of the fastest growing Churches in Nigeria, headquartered in the City of Warri, Delta State.

The billionaire pastor announced in 2021 that he had acquired a private jet. He had posted photo of his on Facebook and wrote: “This was me in 1996 preaching with vigour, power and grace under a batcher at N’jamena Tchad and now 2021 in a private jet.

“We did not arrive here by accident. The entirety of my life has been a walk of faith and by consistent practice of the covenant. The covenant works!”

“Look, with the whole of my heart, I believe in Bishop David Oyedepo and if you don’t believe in him, I have no relationship with you. I’m not neutral.

“There’s nothing like you’re talking against them and I want to listen whether there’s reasoning in what you’re saying, forever, what you’re saying is unreasonable, it’s complete crap, even if they’re wrong, I stand with them. I believe. I think this is where this sophisticated generation of internet and bloggers, they have missed it. We are so more than, and we’re more suffering. You see people moving from poverty to poverty, shame to shame,” he said.

He said he would curse anybody who spoke ill of Oyedepo.

Pastor Paul Enenche is the Senior Pastor and founder at Dunamis International Gospel Centre in Abuja. The Glory Dome which he built is right now the biggest auditorium in the world, sitting about 100,000 people at a service.

The billionaire pastor also came out of Living Faith Church to form his ministry. He has never hidden his admiration for his mentor, Oyedepo. He was one of those who tore Daddy Freeze apart, when he attacked Oyedepo in 2020. He called Daddy Freeze a “baldheaded fowl.”

He had said: “Yesterday, a man drew my attention from America, regarding a video that was mimicking God’s servant, Bishop David Oyedepo, posted by the MAD DOG called Freeze. MAD DOG emphasized. Someone said, Pastor, why are you calling someone a mad dog, Jesus did that first; he called Herod a wild dog – a fox.

“I said MAD DOG because that is spot diagnoses. Spot diagnoses is a situation whereby you know a sickness by just looking at the patient without even asking any questions. What he is exhibiting a is mad behavior.”