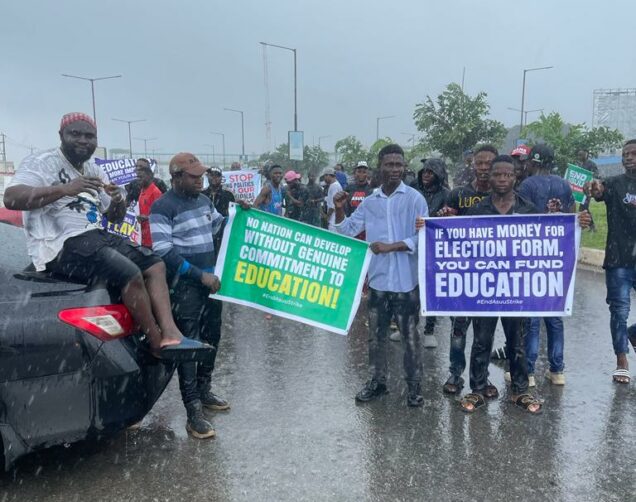 The National Industrial Court of Nigeria had on Wednesday ordered ASUU to call off its ongoing nationwide strike.

However, NANS, in a statement issued by its spokesman, Giwa Yisa Temitope, said ordinarily, the Federal Government was not meant to have dragged ASUU to court.

“But, the fact that they had to drag ASUU to court is a signal that this government cannot handle crisis. And, we want to state categorically that the court cannot force members of ASUU back to lecture theatres.

“And, as it stands today, with that court judgment, we maintain that the court has not resolved the problem and we reject the judgment in strong terms.

“The court could have said that the Federal Government should go and pay rather than say that lecturers who are on strike should go back to classrooms,” it said.

NANS added that the only remedy to this strike was for the Federal Government to accede to the demands of ASUU which the government willingly entered into with them and properly fund education.

Earlier, delivering judgment, Justice Polycarp Hamman, held that the court determined the application based on issue two as formulated by the claimants.

”The ASUU by themselves, members, agents, servants or anyone privy to them is hereby restrained from taking further step or taking any action or otherwise any strike action pending the hearing and determination of the substantive suit.

”The court in addition finds merit in the application for Interlocutory injunction brought by the claimants,” he held.

Hamman further said that in granting an injunction, certain requirements such as existence of legal rights, balance of convenience, conduct and evidence of damages and loss needed to be met by the applicant seeking reliefs.

He also discountenanced the argument of Mr Femi Falana, SAN, counsel to ASUU, on the issue that Mr Okechukwu Wampa was not qualified to depose to the claimants affidavit.

Falana had argued in the defendant’s counter-affidavit that Wampa’s deposition was based on hearsay.

The court said that Wampa being a legal officer employed by the Attorney-General of the Federation and deployed to the Ministry of Labour and Employment as a legal adviser could depose in the issue and could offer legal advise in the matter.

The court while addressing the issue of competency of the referral as raised by Falana, it ruled that the issue would be delved into when taking the defendant’s preliminary objection application and during the hearing of the substantive  suit.

The judge added that the balance of convenience tilted to the claimants based on paragraph 3,5,6 and 7 of their affidavit.

He said the paragraphs which cited the plight of students who ought to have graduated still in school as the result of the strike and the claimants who owns the public universities that are on strike as balance of convenience.

The court also ruled that the intellect of students who have been out of school for several months equated irreparable loss and damages were the facilities that have been dormant for months.

The court also discountenanced the argument of the defendant which submitted that the urgency of the matter was self- induced.

Falana in his submission had prayed the court for an accelerated hearing in the suit instead of granting an interlocutory injunction.

The court however differed that it was not self-induced as parties had been in negotiation all the while until the defendant declared the strike as indefinite on Aug.29.

The court therefore held that the conduct of the claimants were not reprehensible.

The court in conclusion stated that granting an injunction was at the discretion of the court, that the court however found the application meritorious on the strength of section 256 of the Constitution, section 18(1e) of the Trade Disputes Act and section 17 of the NICN proceeding, as shown by the claimants

The court made no order as to cost and added that the court will be sent back to the president of the court to be reassigned as the court ends its vacation by Sept.27.

News Agency of Nigeria ( NAN) reports that the the Minister of Labour and Employment on behalf of the Federal Government had filed the matter before the court by way of referral instrument to resolve the issue of the ongoing strike by ASUU.