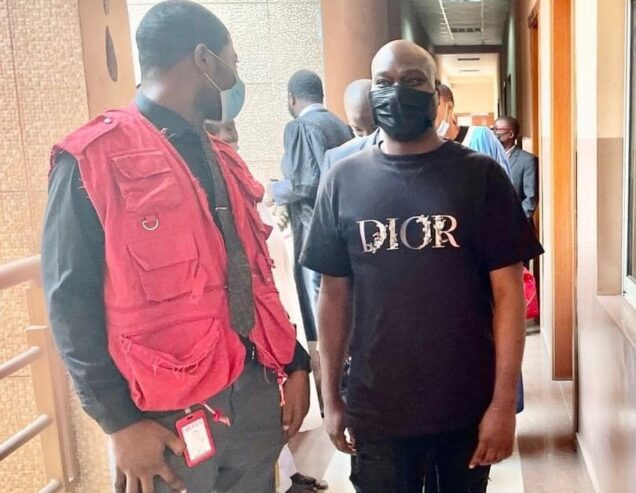 Mompha, right, with an EFCC operative

An Ikeja Special Offences Court on Wednesday ordered the continuation of the the trial of the media celebrity, Ismaila Mustapha (alias Mompha), charged with alleged six billion naira laundering, in absence.

“Make sure you bring your witnesses on that date,” Dada said.

She further ruled that his trial was to continue in absentia following futile effort by the Economic and Financial Crimes Commission, (EFCC) to arrest him after jumping bail.

The EFCC counsel, Mr Abbas Mohammed, said that the commission had made frantic effort to arrest the defendant but to no avail.

“We also wrote letters to our counterpart to secure the presence of the defendant to this Honourable court.

“My lord, we shall be asking for another date to enable prosecution of the defendant on trial in absentia.

The defence counsel, Mr Kolawale Salami, also aligned with the prosecution and confirmed the position of the commission.

NAN reports that the absence of the defendant had on June 30 stalled stalled his his money laundering trial before the court.

The court had on June 22 issued a bench warrant for Mustapha’s arrest following his absence in court.

Dada also revoked the bail she granted the defendant.

Mompha was equally absent in court on June 16.

On June 10, EFCC accused him of flouting the court’s order by travelling to Dubai with a new international passport.

Others are retention of proceeds of criminal conduct, use of property derived from an unlawful act, possession of a document containing false pretences, and failure to disclose assets. NAN) (www.nannews.ng)