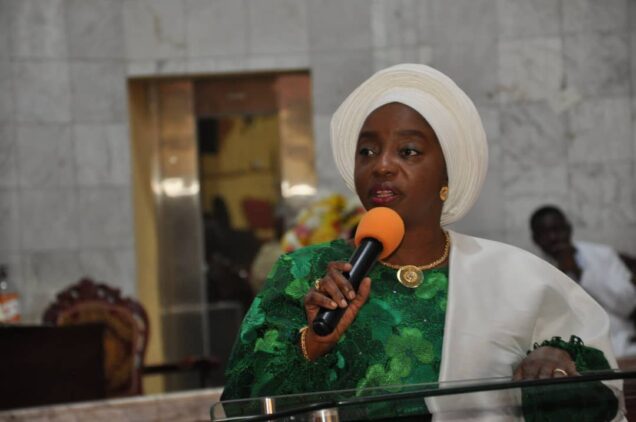 Sanwo-Olu's wife speaking at the event

Christian pilgrims have been charged to exhibit positive difference and be shining examples in their different spheres of influence for the development of society and the State at large.

Speaking at the thanksgiving service held in honour of 2021 General/2022 Easter pilgrims at Chapel of Christ The Light in Alausa, wife of the Lagos State Governor, Dr. Ibijoke Sanwo-Olu, advised pilgrims to reflect the lessons learnt during the exercise in their daily lives in order to generate positive attitude from people.

The First Lady noted that the pilgrimage exercise had impacted the pilgrims positively and brought about spiritual rejuvenation and transformation, hence the need to consciously exhibit good character and be worthy ambassadors of Jesus Christ.

Her words: “Now that you are back, you are encouraged to let the lessons learnt to reflect in your relationship with God and also with people you come in contact with on daily basis”.

“According to Habakkuk 1:13, the Bible made it abundantly clear that God is too holy to behold iniquity. Therefore in your different spheres of influence and authority, people must see a positive difference in your activities going forward.”

She commended the Lagos State Christian Pilgrims Welfare Board (LSCPWB) for conducting a hitch-free pilgrimage journey to Israel and Jordan.

Commissioner for Home Affairs, Prince Anofiu Elegushi, said the theme of the Thanksgiving, “Peculiar People” was apt as it portrayed the various challenges encountered by the pilgrims and the agency of government as this was the first time that there would be a combine pilgrimage to Israel and the Kingdom of Jordan.

“We couldn’t have chosen a better theme given the challenges we encountered which we overcame eventually. It is fitting at this point to state that we are indeed peculiar people with a deep sense of appreciation and we show this trait in praises and thanksgiving to God,’’ he said.

Elegushi commended the pilgrims for good conduct throughout the journey and for putting their trust in government to conduct a seamless exercise.

He, however, charged the Jerusalem and Jordan Pilgrims (JJP) to continue to be worthy ambassadors and imbibe the teachings learnt during the pilgrimage exercise.

‘’Be a good ambassador of the Lord Jesus Christ. Put to work that which you have seen and learned from the various biblical sites visited and as you and I begin to do this, we will have the Nigeria  and indeed the Lagos State of our dream.’’ he added.

The Board Secretary, Lagos State Christian Pilgrims Welfare Board (LSCPWB), Mrs. Yetunde Gbafe, thanked the Lagos State Governor, Babajide Sanwo-Olu for his tremendous support towards the success of the pilgrimage to Israel and Jordan as well as Exco members.

She also commended the Jerusalem and Jordan Pilgrims (J.J.P) for their good conduct throughout the journey as well as the entire board, staff and stakeholders for their unflinching support while noting that sales of form for pilgrimage exercise is available throughout the year at the agency’s office at Old Secretariat, G.R.A, Lagos and annex at Christ the Light Chapel, Alausa.

In his sermon, Pastor Femi Emmanuel reminded the congregation of the importance of thanking God and showing gratitude always, pointing out that all things work together for good.

He noted that the pilgrims are now peculiar people hence they must exhibit good examples wherever they find themselves.

“Your language and character must be different now and reflect that of peculiar people”.

Prayers were offered for Governor Babajide Sanwo-Olu and his deputy, Dr. Obafemi Hamzat and their family as well as Lagos State and the Country at large while testimonies were said by the pilgrims on the miraculous and divine interventions of God in their lives during the pilgrimage.