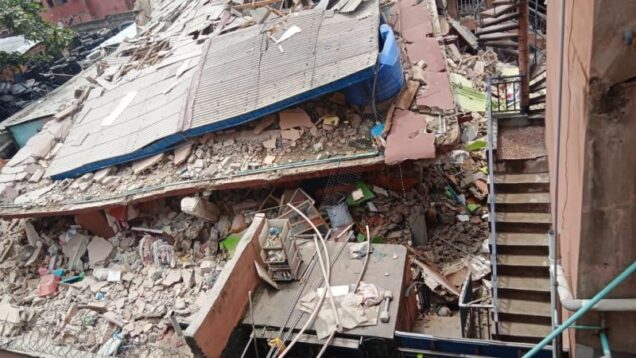 Another three-storey building has collapsed at Sonuga Street, Palm Avenue, in the Mushin area of Lagos, Southwest Nigeria.

The building caved in on Friday afternoon, as emergency workers begin frantic rescue operation to save those trapped in the debris.

He said two people had been rescued, saying that further investigation revealed that the collapsed building was an adjoining building to another three-storey building.

Oke-Osanyintolu stated that “two people who were trapped inside the building have been rescued and treated. However, we were informed that two female that are occupants of the building are still missing.”

He added that the search and rescue operation was ongoing, as  LRT, LASG fire, LNSC, LABSCA, and NPF were all responders at the scene.

According to him, an adult and a children were those rescued why emergency rescuers had intensified efforts to rescue more people alive.