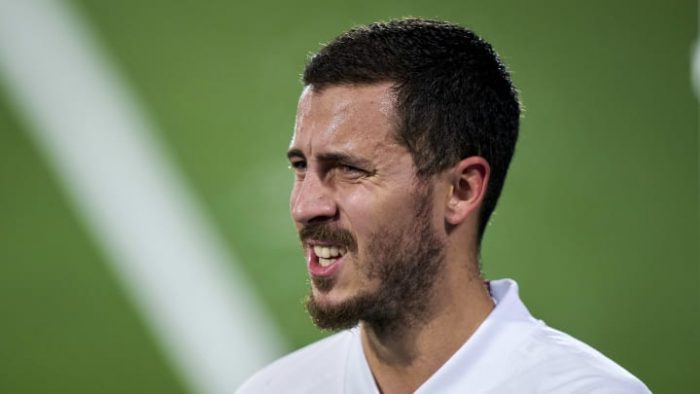 Eden Hazard has vowed he will return to his best form once his “delicate situation” at Real Madrid has been resolved.

The Belgium international showed flashes of quality during his 65 minutes on the field in his country’s 2-1 Nations League win over Wales on Thursday.

That was the longest Hazard has played in a single match this season, having been restricted to just one start across Madrid’s nine matches, each of those ending in victory.

Hazard’s place in Belgium’s line-up has been called into question ahead of the World Cup, and the ex-Chelsea forward acknowledged he needs to be playing more regularly.

“I was happy to start another match,” he told RTL. “You saw that, I think. I’m happy when I play and it was nice to play for the supporters here [in Brussels] again.

“I know what I can do. Now I want to get in shape for the World Cup. We’ll see what the coach [Roberto Martinez] decides, but I’m happiest when I play.

“When I play, I give it my all. It’s a delicate situation at Real Madrid. I feel like playing more, but I can’t do more.

“I’ve always said the old Eden Hazard will come back when he plays. I just need to get back into the rhythm.”

Michy Batshuayi and Kevin De Bruyne both linked up with a goal and an assist each to give Belgium a 2-0 lead against Wales, who pulled one back through Kieffer Moore.

Martinez’s side remains within three points of Group A4 leaders Netherlands ahead of traveling to Amsterdam on Sunday for their final game.

“We are going to try to play a good game there and prepare ourselves for the World Cup,” Hazard said.

“I’m glad we played so well after the [Wales] goal. We can learn a lot from this for the next games.”