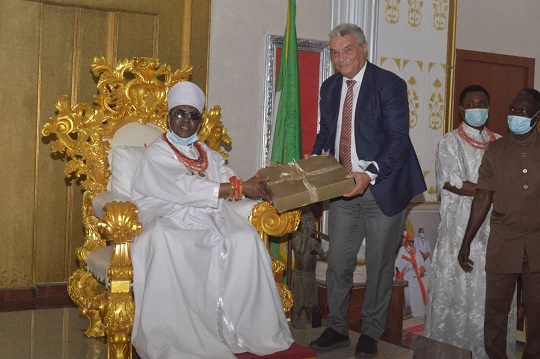 The Oba of Benin, His Royal Majesty, Oba Ewuare II, has expressed concern over the raging war between Russia and Ukraine, urging an end to the conflict in the interest of peace, amidst uncertainty, solidarity and hope.

The monarch who disclosed this when the Turkish Ambassador to Nigeria, Hidayet Bayraktar, paid him a courtesy visit in his palace in Benin City, Edo State, charged authorities of the warring counties to cease fire for the interest of global peace and security.

Oba Ewuare told his visitor that has been praying to God and his ancestors to abate the conflict and ease the pains of the citizens.

He, however, commended the President of Turkey, Recep Tayyip Erdoğan, for creating a corridor for humanitarian aid services.

“We are praying that Russia and Ukraine conflict come to an end as quickly as possible, for the sake of peace and development of the world. We pray that it doesn’t escalate.

“We are also aware of the role your President played between Ukraine and the Russia State. You sent much needed grains to Africa, and we say on behalf of Nigerian people and Africans, thank you,” Oba Ewuare said.

In his remark, the Turkish Ambassador, Hidayet Bayraktar, noted that “part of the reasons why we came today is on a fact-finding mission to visit the States in Nigeria and to explore economic opportunities for Turkey and Nigeria.”

He described his journey as very complex, but fruitful mission.