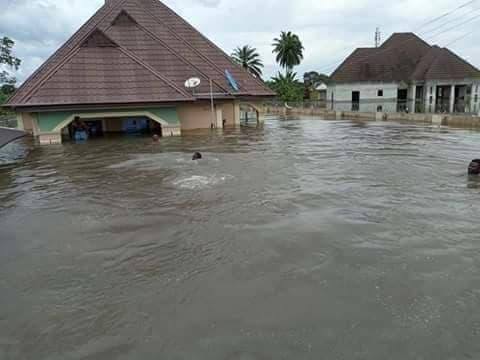 Awogu, who raised the alarm in a statement on Friday, said that some people had been trapped in the flood and immediate evacuation was needed to save lives.

Ogbaru is a riverine area with all its 16 communities located on island or the bank of River Niger.

Awogu, a rights campaigner and former Chairman of Ogbaru LGA, said that there was need to adequately equip four designated holding camps so that those displaced could move into them.

“Many families are displaced with nowhere to run to, as no IDP centre is prepared.

“Ogbaru is a disaster waiting to happen; we need massive mobilisation of food and non-food items to be made available.

“We also need immediate setting up of holding centres where the displaced can be sheltered,” he said.

The APGA House of Representatives candidate urged those still in lowland areas and not yet affected to voluntarily relocate to upland areas for safety.

He said, “Ogbaru is going under the water hourly, and it portends grave danger for the people of the area.”

Mr Thickman Tanimu, the Acting Coordinator of the National Emergency Management Agency, Enugu Zonal Office, had advised farmers and other people in about 14 flood-prone LGAs in Anambra State to relocate to upland areas and consider early harvesting of produce.