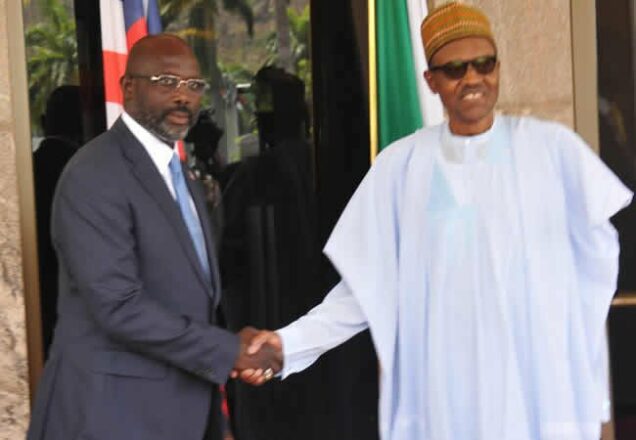 President George Weah of Liberia and President Buhari of Nigeria

The embassy of Nigeria in Monrovia has reacted to a viral video which carried what it called a fake narrative on the security situation of Liberia and an attempt to blackmail President George Manneh Weah.

The video alleged that Weah’s administration is raising a dangerous militia to rig his re-elections into office during the 2023 National Elections in Liberia.

The authors, according to the press statement by the Nigerian Embassy in Monrovia, the capital of Liberia, “authors of the video went further to claim that the terrorists (militia) will be recruited from Jamaica, Burkina Faso, Middle East and Nigeria.”

The Embassy informed the general public that the Nigerian government dissociates itself from every project aimed at destabilizing the 2023 National Elections in Liberia as claimed by the video clip and “condemns the linkage of Nigeria to such devious scheme, found only in the imagination of the crafters of the fake and hate-filled video.”

Nigeria joins other well-meaning members of the diplomatic community in Liberia to “condemn the use of social media to hit up the political atmosphere of the country ahead of the 2023 elections and hereby appeal to all political parties and contestants to play by the codified rules of the Electoral Processes henceforth as enshrined in the Constitution of Liberia.”