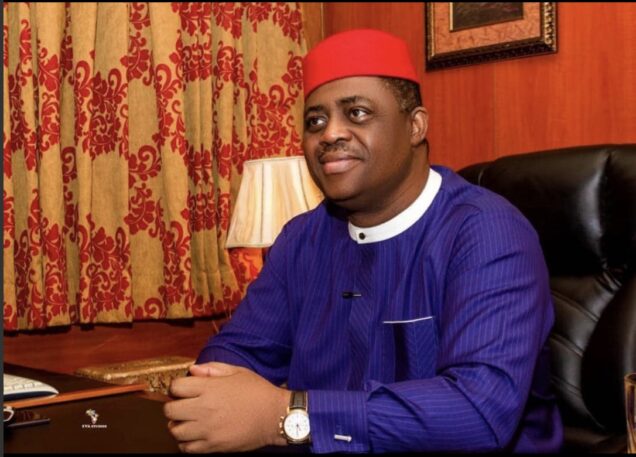 Femi Fani-Kayode, a former Aviation Minister, taunts the Peoples Democratic Party to settle its differences to remain strong for the 2023 electoral battle.

This is because, going to war with the members amid this acrimonious, pathetic condition and situation of barbarous civil war and fratricidal butchery would be unfulfilling, unexciting and almost dishonorable

Our battle formations have been assembled and the game is on! The marching drums are beating, our horses pull at the bit and, our warriors are singing as we prepare to enter the fray.

Caesar has crossed the Rubicon: war is inevitable! The enemy should prepare for a relentless bombardment! When the whistle blows on September 28th we shall give no quarter and we shall ask for none.

On that day we shall charge, cry havoc and let slip the dogs of war! I urge Iyorcha Ayu to resign as National Chairman of his party and I implore the opposition PDP to quickly settle their differences and put their house in order.

I say this so that when our highly esteemed presidential candidate, Asiwaju Bola Ahmed Tinubu, the Jagaban of Borgu, trounces Atiku Ibn Dubai, their Waziri of Abu Dhabi, at the polls in February next year they will have no excuses. I appeal to Nyesom Wike to give them back their balls so that they can be fit for battle.

Taking them on when they are so badly divided and when they aramid of this acrimonious pathetic condition and situation of barbarous civil war and fratricidal butchery would be unfulfilling, unexciting and almost dishonourable.

It would result in an unprecedented and uninspiring electoral massacre. They would face utter devastation and annihilation. Their pants would be removed before the entire world and they would be buggered stiff without any hope of redemption or for the future.

In short we would have no opposition left in Nigeria apart from Rabiu Kwankwaso’s affable yet regional ‘Kwakwansia’ brigade known as the NNPP and the aggressive, excitable and murderous mob, gullible and unruly rabble, abusive and misguided street urchins, violent Endsars veterans, ignorant plebians, closet secessionists and Biafran extremists that call themselves the ‘Obidients.’

What we want is a real fight against a big, strong, happy, healthy, fit and worthy adversary and opponent so that when we knock them for six we can boast of the fact that we fought against an army of able men and not one of the dysfunctional boy-lovers and unruly, quarrelsome, obnoxious, acrimonious and divided little children.

There is no glory or honour in spanking a feeble, emaciated and defenceless adult child that cannot fight back. That would be very unfair and would be an act of cruelty. I urge them to stop fighting, to close ranks and to make peace amongst themselves so that we can flog them before the world when they are at their full strength and capacity.

Meanwhile, I never knew that the prayer of “O Lord scatter the ranks of our enemies and make them turn their swords against one another” could be so powerful and effective. This is a great testimony.

We have only just started warming up, campaigns have not yet begun and yet they are already groping in the dark, slapping and cursing one another publicly and attempting to gouge the eyes of each other out! What a sight to behold!

This is the party that says it wants to take power in Nigeria? God forbid it! By the time this is all over they will roll on the floor, shed bitter tears, gnash their teeth, chop leather and know that we serve a mighty God!