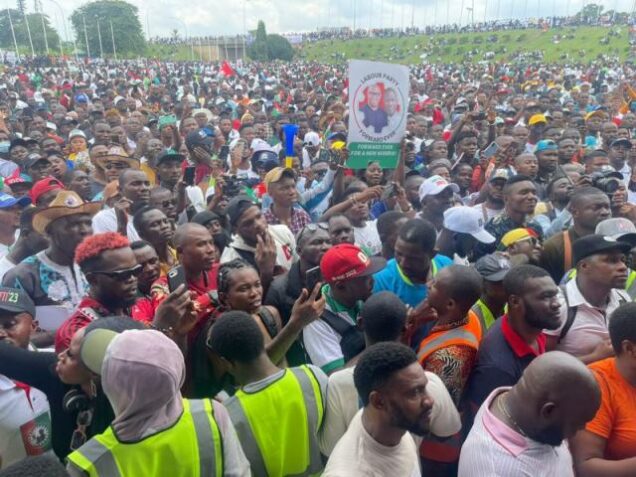 Huge crowd in Abuja for Obi

A huge crowd trooped out in Abuja on Saturday to drum support for the presidential ambition of the Labour Party’s presidential candidate, Peter Obi.

Supporters of Obi, known as ‘Obidients’ had trooped out for a Mega  Rally in the nation’s capital, flexing muzzles with the APC.

The rally in Abuja  saw Obi’s supporters marching  en-masse from the Unity Fountain to City Gate in solidarity of Obi’s presidency.

Obi had tweeted, displaying photos from the rally, saying “From Kano, I am watching the OBIdients gathered in Abuja and exercising their Constitutional rights to peaceful assembly. I salute you all. I appreciate you all. God bless you all and God bless the Federal Republic of Nigeria.”

He also said he had the opportunity of visiting the Emir of Gaya, Alhaji Aliyu Ibrahim, with his running mate, Sen. Yusuf Datti Baba-Ahmed.

“We discussed the recent Kano’s market fire incident and flooding in the north,” he said.

He also tweeted” “Visiting the Ancient Kingdom of Kano with my running mate, Yusuf Baba-Ahmed. I had the honour of visiting the Emir of Kano HRM Aminu Ado Bayero. We had very Useful and constructive discussions, including the fire incident in Kano market and the recent flooding in the north.”