75-year-old grandpa Bajama, 21 others smashed over tons of illicit drugs 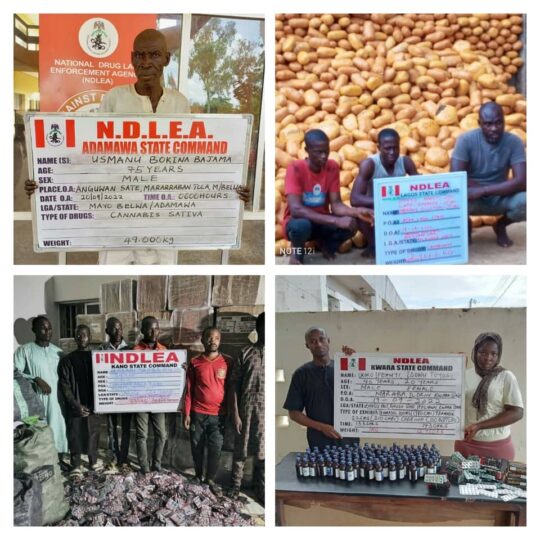 During the operation, over one million bottles/capsules of banned new psychoactive substance, Akuskura and tramadol as well as 2,536 kilograms of cannabis were seized and over 10 hectares of its farms destroyed in Edo and Adamawa.

NDLEA spokesman, Femi said the septuagenarian was arrested in the early hours of Tuesday 20th September at Anguwan Sate, Mararraban Tola, Mayo Belwa council area of Adamawa where he had a cannabis plantation from where 49kg of the illicit substance was recovered.

He said in Kwara, at least 19,878 bottles of the banned new psychoactive substance, Akuskura were intercepted by NDLEA operatives along Ilorin-Jebba highway on Wednesday 21st September and two suspects: Oladokun Oluwaseun, 49, and Ibrahim Jimoh,27, arrested.

“They claimed the consignment packed in 35 jumbo sacks was loaded in Ibadan, Oyo state, and meant for distribution in Jos, Plateau state. Earlier, two suspects: Ukoro Ifeanyi, 46, and Idowu Toyosi, 20, were arrested with 2,290 capsules of tramadol and 100 bottles of codeine-based syrup at Mararaba park, Ilorin. The drugs were brought in from Onitsha, Anambra state.

”At least, 979,119 capsules of expired pregabalin weighing 733kg were recovered from Musbahu Ya’u, 28, and five others at Dansarai area of Kano, while in Enugu, 197.8kg cannabis was recovered in a store at new market, Enugu on Tuesday 20th Sept. In the same vein, 117.7kg of the psychoactive substance was intercepted along Okene-Abuja expressway in a truck coming from Lagos to Abuja,” he said.