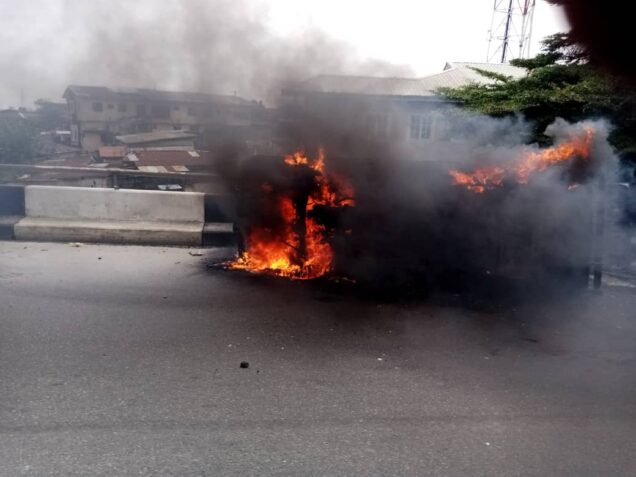 At least seven people have been burnt to death at Iyana Oworo area of Lagos, Southwest Nigeria, after a commercial bus caught fire due to reckless driving and over-speeding.

It was gathered that the accident involved a commercial Mazda bus with 14 passengers, with registration number KJA 699 GY.

Eyewitnesses saw the vehicle suddenly caught fire as passengers tried to get out of the bus.

A girl reportedly ran out of the burning vehicle with fire all over her.

Twelve passengers were said to have been trapped, with the driver said to have escaped from the vehicle with burns on his body.

Three other passengers were said to have also escaped from the vehicle and were taken to the Gbagada General Hospital for treatment.

Another passenger was said to have been treated at the scene of the incident and discharged.

Officials of the Lagos State Emergency Management Agency (LASEMA) and the Lagos State Ambulance Services (LASAMBUS) were seen at the scene of the incident trying to rescue those trapped in the burning vehicle.

Others seen at the scene included officers of the Lagos State Traffic Management Agency (LASEMA) and the Nigeria Police Force.

A government source said four female, three male, including a child were burnt to death in the fatal accident.

The State’s Environmental Health Monitoring Unit (SEHMU) officials were said to have evacuated the bodies from the scene of the accident.

The accident caused serious gridlock on the expressway. The burnt vehicle is still at the scene of the accident, while efforts were being made by LASEMA to evacuate it from the scene.