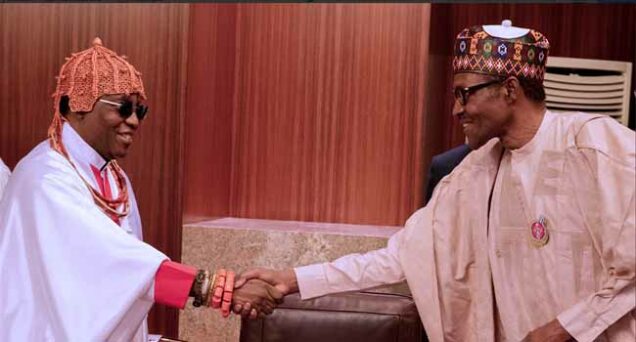 President Muhammadu Buhari has approved the nomination of the Oba of Benin, Oba Ewuare II, for the national award of Commander of the Federal Republic (CFR) of Nigeria.

CFR is the highest national honour conferred on any citizen of Nigeria for his/her contributions to the development of the nation, aside from the President and the Vice President.

The letter of nomination which dated 16 September, 2022, and issued on behalf of the President by the office of the national honours and awards in the Federal Ministry of Special Duties and Inter-governmental Affairs, Abuja, was formally presented to the Monarch last Friday in his palace in Benin, Edo State, by the Imma of Somorika, HRH, Sule Idaiye.

Presentation of the award which is slated for 11 October, 2022, coincides with the month of the Oba Ewuare’s 6th Coronation anniversary.

According to a statement by the Chief Press Secretary to Oba of Benin, Mr. Osaigbovo Iguobaro, the reading of the letter dated 16 September, 2022, elicited much splendor, embrace and rejoicing among palace functionaries, Benin Palace Chiefs, Dukes, Royal family members and guests who came to pay homage to the traditional ruler in the Palace.

In his remark, Oba Ewuare II expressed gratitude to President Buhari for the gesture.

“This announcement has come and we are grateful to God Almighty and our ancestors. I am just as excited as you are. We are happy about the news. I want to use this opportunity to thank Mr. President.

“Last year, he directed Nigeria High Commissioner to the United Kingdom, Ambassador to personally bring the two artefacts from Scotland and Aberdeen and present them to me in Oba Palace. That was an unprecedented move by the President.

“We are grateful to Mr. President, and now, he has honoured us with Commander of the Federal Republic. We will command well. I pray that God Almighty give me more wisdom to carryout my duties and responsibilities that have been placed on my shoulders,” Oba Ewuare said.