Why I am not 'Obi-dient' like my husband - Foluke Daramola 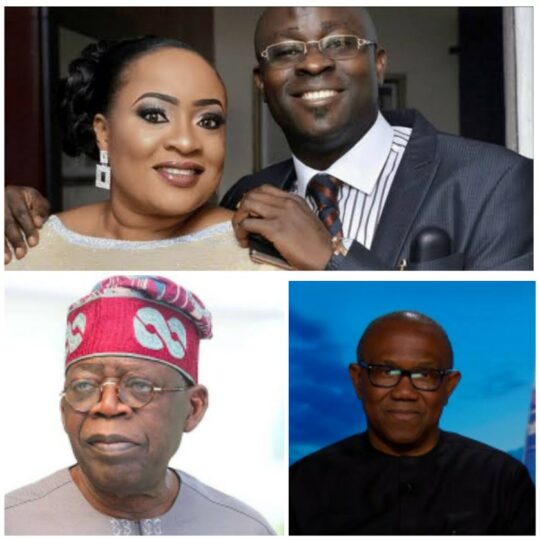 Popular Nollywood actress Foluke Daramola-Salako is proving to Nigerians that it’s not a barrier for husband and wife to have different political leanings.

Daramola expressed this belief during an interview with PM NEWS on Saturday in Lagos following her appointment to the campaign council of APC Presidential candidate Asiwaju Bola Ahmed Tinubu.

Foluke, whose husband Ezekiel Kayode Salako remains the chairman of the Labour Party in Lagos and “fully obi-dient”, has been appointed as the Assistant Director for media department of the Performing Arts Directorate of the APC’s presidential council.

The actress has maintained that her husband’s role in the “Obi-dient movement” will not affect her loyalty and assignment to APC.

According to her, she has been in politics and in the structure of Bola Tinubu since 2003, noting that her relationship with Tinubu is like that of father and daughter.

Daramola said: “I have been in politics and with Asiwaju Bola Tinubu since 19 years ago and I married my husband Salako, 11 years ago. In fact, Asiwaju is a father to me, he signed the certificate of my first marriage, his wife Oluremi was the mother of the day on my engagement while Femi Pedro was the chairman of the day. I have a rich history with Asiwaju, so this is not just a normal assignment for me, it is a serious assignment given to me by my father, so I can tell you, my husband won’t have a problem with me working for my father. I was with Asiwaju when he was governor and will surely support him and stand by him when he becomes the president of Nigeria.”

The Nollywood actress, however, debunked the allegation that her husband may be a mole in Labour Party.

She said: “Those who know my husband know he eats and breathes Labour Party. He joined Labour as a citizen who had a different ideology and wants to be part of a different structure. He never knew he will become the Chairman but in the long run, people in his party saw his passion, dedication and commitment and they decided to make him the Chairman of the party in Lagos. My husband is a loyal and faithful man, if he is with you, he is 100percent committed to any course he believes in.”

When asked why she did not join the Labour Party, Daramola said: “One of the attributes of my husband is that he is not autocratic. He respects my decision and my opinion. As I said, he has a different ideology to mine and yet he respects my decision to follow my belief in the APC structure.”

The actress further rejected claims that she and her husband may collude to work in favour of either Labour or APC.

Daramola said: “We are people of integrity. My husband will not come to share sensitive information about his party with me and I will not do the same. There is still a long way to go in life and our reputation is very important to us.”