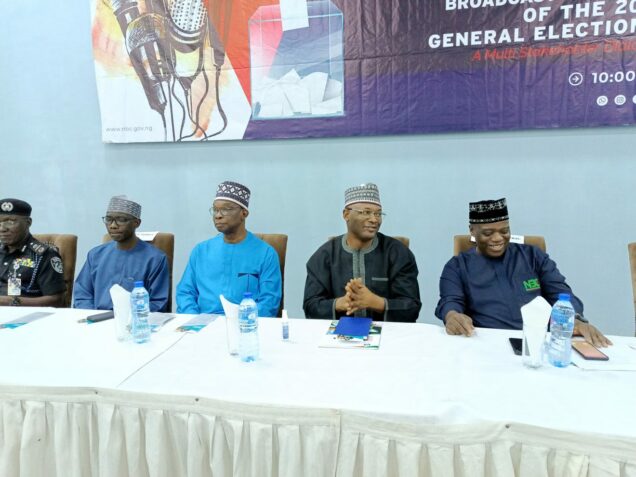 The Director-General of NBC, Malam Balarabe Ilelah, at a sensitisation forum on political broadcasting with the theme,” Towards a Fair and Responsible Broadcast Coverage of the 2023 General Elections: A Multi Stakeholders Dialogue, held in Abuja.

The National Broadcasting Commission (NBC), on Monday itemized a series of ‘dos and donts’ for broadcasters ahead of the 28 September, 2022 commencement of campaigns for 2023 elections.

The Director-General of NBC, Malam Balarabe Ilelah, itemised the guidelines at a sensitisation forum on political broadcasting with the theme,” Towards a Fair and Responsible Broadcast Coverage of the 2023 General Elections: A Multi Stakeholders Dialogue, held in Abuja.

Ilelah urged broadcasters to uphold ethics of the profession and all legal provisions guiding broadcasting nationally and internationally while anchoring political programmes to guide their platforms well and to ensure that guests abide by the broadcasting code.

He explained that the objective of broadcasting was for the promotion of national unity, participatory democracy, political awareness and inculcation of spirit of tolerance of divergent views and opinions in people.

The NBC boss, therefore, enjoined broadcasters to give equal access and opportunities to all political players, registered political parties and candidates.

” This is in addition to ensuring equity in airtime allocation and coverage of political parties’ activities particularly during prime times. It is also the time for you to make money from Political Adverts and Campaigns but ensure that this is done within the ambit of Law.

” Remember that broadcast stations are held responsible for any breach. The stations shall therefore, assume and accept editorial responsibility. I also use this opportunity to remind broadcasters not to allow any form of hate speech, fake news, derogatory or divisive remarks and any incendiary broadcast on their platforms.”

Ilelah said broadcaster was not allowed to deny any group access to airtime, adding that any form of denial of access was prohibited.

” However, if your political content is indecent and hateful, then a station is allowed to turn it down and give reasons why it cannot be taken.

” The Commission also uses this opportunity to tell Nigerians that they can complain to the NBC if content on any station annoys their sensibilities or sensitivity.

” Just call or email us at [email protected] your complaint you should provide the following: •the name of Station, •Title of Programme, •Time and Date of Broadcast and •Essence of the complaint. •Please remember to add your name and Telephone so that we can reach you for redress.”

Similarly, the NBC boss called on broadcasters to ensure that every partisan political broadcast was recorded off transmission and preserved for 150 days after broadcast.

” You are also required to stop the broadcast of any partisan political Programme, 24 hours to the polling day. On election days, the broadcaster is to relay election results or winners only as announced by the authorized electoral officer.

” As broadcasters you are expected to offer your platforms for the exchange of ideas, comments and constructive criticisms for the development of democratic culture.

” Anchors are advised to manage their political guests well and do not allow them to malign others especially those not present on the programme. This is in the spirit of fairness, because such people do not have the opportunity to defend themselves at that time.”

On his part, the Chairman, Independent National Electoral Commission (INEC), Prof. Mahmood Yakubu, said the media play a critical role in ensuring a more effective public enlightenment on the provisions of the Electoral Act 2022 in particular and other aspects of the electoral process in general.

Yakubu said political parties, candidates and their supporters as well as the media have a responsibility to operate within the confines of the law and the provisions of the commission’s rules and regulations.

He noted that issue-based campaign was essential for safe electioneering, adding that it would create the atmosphere for the successful deployment and conduct of all electoral activities.

He also said that campaigns should be devoid of hate speech; abusive, intemperate or slanderous language; insinuations or innuendoes likely to provoke violent reaction; physical attack on supporters of one party by another or destruction of campaign materials.

” Specifically, Section 95 of the Electoral Act 2022 defines the responsibilities of political parties and candidates, the media and public institutions. It also provides sanctions for violations.

” For instance, in the course of our numerous interactions with political parties over the years, many have complained about the denial of access to public facilities for meetings and rallies, exorbitant charges for signages and billboards, and equal access to State media.

” Using the power of incumbency to deny opposition parties access to public facilities is illegal. Section 95 (2, 3, 4, 5 and 6) are unambiguous and worth quoting verbatim as follows: 95(2) the advantage “State apparatus or disadvantage including of the any media political shall party not be or employed candidate to at any election.

” 95(5) at any public print media, equal coverage and visibility shall be allotted to all political parties.”7. Failure to comply with the provisions of the law attracts sanctions against both the media organisation and its principal officers as clearly provided for in Section 95(6).” (NAN)