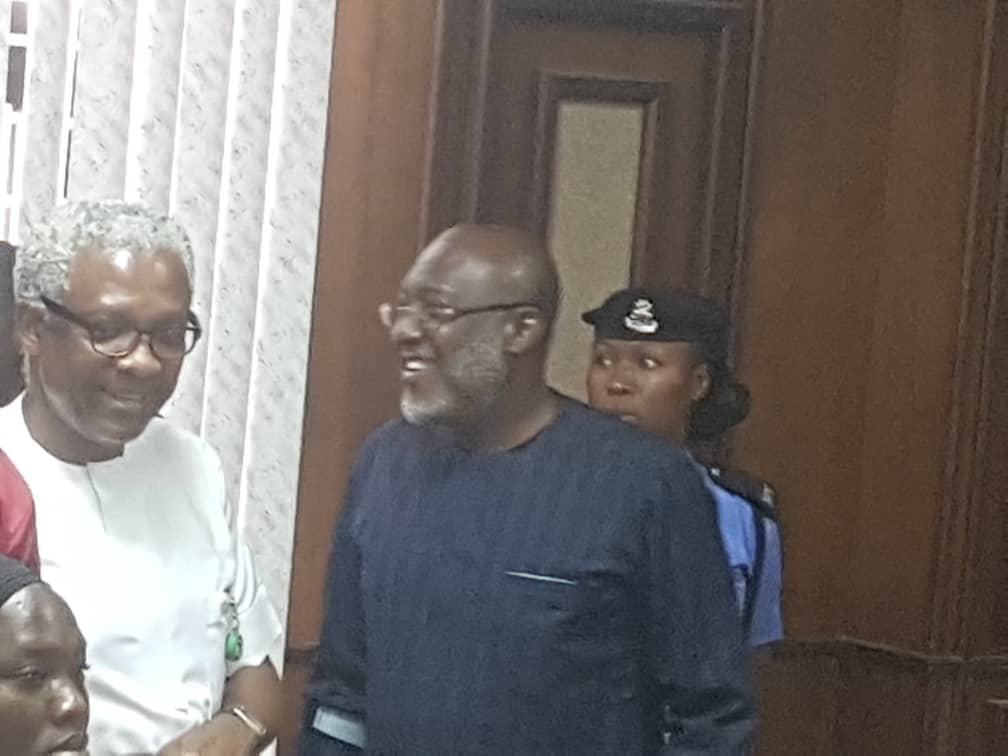 A Federal High Court (FHC), Abuja, on Monday, struck out the suit filed by the Economic and Financial Crimes Commission (EFCC) against former National Publicity Secretary of the Peoples Democratic Party (PDP), Olisa Metuh, for retrial.

Justice Emeka Nwite, in a ruling, described the seven-count criminal charge in a suit marked: FHC/ABJ/CR/05/2022 filed by the EFCC, as “an abuse of court process.”

The anti-graft agency had filed the suit before Nwite for the retrial of Metuh (1st defendant) and his company, Destra Investments Ltd, listed as the 2nd defendant in the case.

Justice Nwite held that he aligned with the arguments of counsel for Metuh, Afam Osigwe, SAN, and lawyer to his company, Tochukwu Onwugbufor, SAN, that while the matter was pending before the Supreme Court, it was a gross abuse of the court for the commission to have filed the same matter for retrial before him.

The matter, which was number eight on the cause list, was scheduled for Metuh, who was in court, to take his plea.

However, at the resumed hearing, Justice Nwite asked counsel for the EFCC, Olanrewaju Adeola, about the current position of the matter.

Adeola informed that Metuh was convicted by the trial court and went to the Court of Appeal where the decision of the lower court was upturned.

“We challenged the decision of the Appeal Court. We understand that the matte was listed this morning at the instance of the defendant for application for his international passport,” he said.

Responding, Osigwe said that Metuh got information about the matter at the FHC on social media and that this matter would commence.

He, however, said that he had earlier had a discussion with the EFCC lawyer on the current position of the matter, “because there is a pending appeal at the Supreme Court in suit number: SC/ CR/583/2021 between FG Vs. Olisa Metuh and another.

“In that appeal, EFCC as a prosecution seeks, among others, the Supreme Court’s order, reinstating the order of this Hon court which was set aside by the Court of Appeal.

“So in the light of the reliefs sought in that appeal, it will amount to an abuse of court process for a fresh prosecution to be commenced when they are asking for reinstatement.

“My learned friend representing the EFCC will also agree with me that this court will either stay proceeding or strike out the application,” he said.

Onwugbufor, who spoke in the same vein, said he filed a motion; a written application before the court to clear any doubt about the position of the suit.

He said after the appeal by Metuh and his company at the Court of Appeal, it was decided that the judgment of the FHC was a nullity and ordered a new trial.

The senior lawyer said that the anti-corruption agency approached the apex court on the ground that the Appeal Court did not determine the whole appeal.

“Actually, what was determined at appeal was the issue of bias. But the EFCC is asking that the FHC judgment should either be reinstated or sent back to the Court of Appeal for retrial.

“My client is also asking the Supreme Court that the Appeal Court did not take into consideration that the whole trial was a nullity and should be dismissed in its entirety and discharged and acquitted the defendants,” he said.
Onwugbufor said that was why he came with the motion on notice to enable the court to determine whether it could try Metuh or not.

Adeola, who represented the EFCC, however, prayed that rather than striking out the suit, the court should adjourn the matter sine die (indefinitely) pending the hearing and determination of the appeal before the apex court.

“The submission of 1st and 2nd defendants’ counsel are to the effect that the charge be struck out or on the alternative, be adjourned sine die.

“For prosecution, we don’t have any problem with that sir.

“But in the interest of justice, the prosecution will be more comfortable if the matter was adjourned sine die,” he said.

However, Osigwe argued that Adeola’s submission was an admission that the present charge was an abuse of the court process, urging the court to do the needful.

He further said that striking out the suit would not be prejudicial to the commission in any way.

“This suit cannot be pending in the light of the appeal pending before the Supreme Court and the proper order is to strike it out because the prosecution will not lose anything for striking it out,” he added.

Corroborating Osigwe’s argument, Onwugbufor said though the court had the discretion to either strike out or adjourn the matter indefinitely, he stressed that even after the apex court’s decision on the matter, he doubted if the matter would be reassigned to Nwite.

“This is so because the matter can be heard at Appeal Court and it will go back to Supreme Court for final decision.

In his ruling, the judge said after listening to the submissions of the counsel in the suit, there was no way the matter could come back to his court without resolving the issues before the Supreme Court.

“I agree with the argument of the 1st defendant concurred by the 2nd defendant that it is an abuse of court process and I so hold,” he said.

He then struck the suit out for being an abuse of court process.