Nigeria at 62: We must learn from past experiences to forge better future - Sanwo-Olu 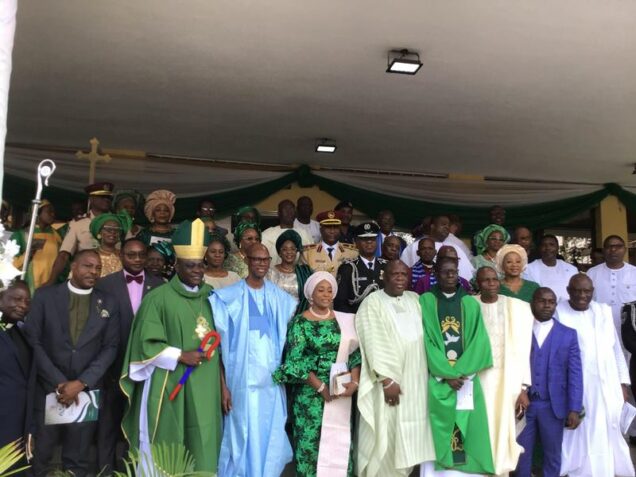 Tayo Ayinde and Home Affairs Commissioner, Prince Anofiu Elegushi and others during the event.

Lagos State Governor, Babajide Sanwo-Olu on Sunday said Nigerians must learn from past experiences and that of other developed countries in order to create an even better future.

The governor spoke at a Thanksgiving Service commemorating the nation’s 62nd anniversary, at the Chapel of Christ the Light, Alausa, Ikeja, Lagos.

“We must learn from our past and from the experiences of other developed countries if we want to create an even better future.

“We must utilize the great strength we have in our diversity and the unique resilience that is second nature to us to achieve the Nigeria of our dream,” he said.

Sanwo-Olu, who was represented by his Chief of Staff, Tayo Ayinde, said as the nation marks her 62nd anniversary as an independent country, it is an opportunity for “us to reflect on our past, our present and the future we desire to see and bequeath to the next generation.

“Within the last 12 months, the County has experienced a lot of challenges, especially various forms and shades of insecurity as well as economic difficulties. However, regardless of all these challenges, by the grace of the Almighty God, we are still united as a nation and forging ahead trusting in the power and grace of God.”

He said as a government, “we have not allowed the challenges and unexpected set back to derail us from fulfilling our electoral promises. In addition to the modest achievements we have recorded, Lagosians still have cause to look forward to greater things to come when we complete some of the ongoing landmark projects beginning from the last quarter of this year.

“Some of these Include the Blue and the Red lines which will significantly transform the public transportation sector. the Imota Rice Mill, Opebi-Ojota Link Bridge e.t.c.

“Our commitment to improve security of lives and properties of the citizens of Lagos State is a priority for this administration because we belief that true development of our State can only be achieved in a stable, secured and peaceful environment.”

Sanwo-Olu added that he administration would continue to deliver on its mandate for the dividends of democracy to be enjoyed by all and would not relent in its commitment to implement policies and programmes that would ensure the growth, development and prosperity of the citizens as highlighted in our T.H.E.M.E.S. Agenda for a greater Lagos.

“As the end of our administration’s first tenure is approaching, we are determined to ensure that all ongoing projects are completed and more impactful policies, programmes and projects would be implemented as a continuation of our mandate,” he said.