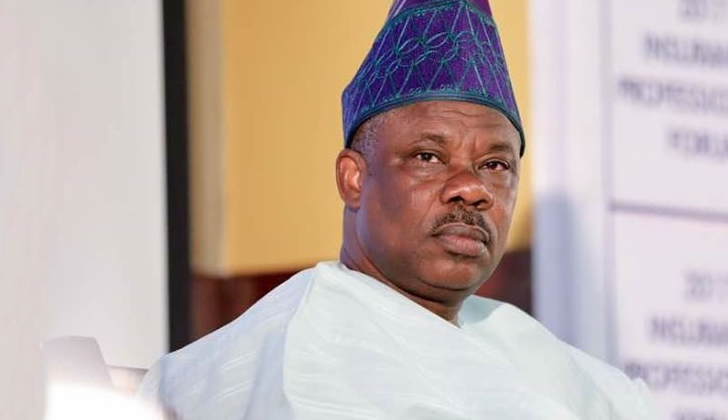 Ogun 2023: I have no deal with Adebutu, PDP – Amosun
Oladayo Jonathan
3 minutes

Former governor of Ogun Ibikunle Amosun, hassaid he is in any way involved in the deal between his former associate, Adekunle Akinlade and the candidate of the Peoples Democratic Party (PDP) for the state governorship election, Oladipupo Adebutu.

Akinlade, was selected as the deputy to Adebutu after he joined the PDP from All Progressives Congress,APC.

Documents on deal purportedly reached between Adebutu and Akinlade on how to share offices if they are elected in 2023 have been circulating.

Some APC members in Ogun have linked Amosun to the deal between his loyalist and the PDP candidate.

However, Amosun, a chieftain of APC and senator representing Ogun Central, said this in reaction to the controversies that he was not part of the deal between Akinlade, Adebutu and the PDP in a statement by his media aide, Bola Adeyemi, on Sunday.

The statement read, “The attention of Senator Ibikunle Amosun, has been drawn to media reports, claiming that he has entered into a political deal with the Peoples Democratic Party (PDP) in Ogun State and Hon Oladipo Adebutu.

“This story is nothing more than a mischief to mislead the public and discredit the hard-earned reputation of the former governor of Ogun State.

“We have stated before and wish to state once again, categorically, without any fear of contradiction that, Senator Ibikunle Amosun, has nothing to do with the PDP in Ogun State. And he is not a party to any alliance formed with anyone or group of persons in the party.

“The public is advised to dismiss the report.”

Meanwhile, the Ladi Adebutu and Akinlade Campaign Organization have defended the so called sharing formular, dismissing the claim that it was a plot to steal public funds.

The campaign organization in a release signed by the Director of media, Afolabi Orekoya said the agreement is not against the interest of the people of Ogun state.

He accused the APC of misleading the public with cheap lies and engaging in cheap black mail over the agreement.

The statement reads, “The attention of the Ladi Adebutu and Akinlade Campaign Organisation has been drawn to a mischievous news trending on social media and some online media platforms to blackmail the Peoples Democratic Party (PDP) Gubernatorial Candidate in Ogun State on an agreement reached as a Memorandum of Understanding to be implemented upon victory at the 2023 polls by the coalition of the two groups.

“The false claim that there was a verbal agreement made to get kickbacks from contractors and to be shared at certain percentages between Adebutu and Akinlade is nothing but mischievous attempt to cheap blackmail.

“We are quite aware of the desperation to discredit our candidates ahead of the 2023 elections by people who already feel their aspiration is threatened by the alignment of Hon Oladipupo Adebutu and his running mate, Hon. Adekunle Akinlade.

“To set the record straight, the agreement was purposely released to the public and aimed at fostering cordial working relationship between the loyalists of Hon. Adebutu and his running mate. It was legally binding to show sincerity of purpose between the two groups. By no means, the agreement neither violated any part of the Nigerian Constitution nor encouraged stealing of public funds. Rather, it is meant for the general public to know that there is nothing hidden as earlier speculated in some circles.

“It should be noted that sharing of elective and appointive offices is not a new thing across political spectrums, especially in situations where there are alignments of forces. The current administration in Ogun State also went into agreements to share offices with several political groups before its emergence, though it failed to fulfill most of its promises which has now resulted into many of the groups withdrawing their support for the second term bid of Governor Dapo Abiodun.

“For emphasis, the document in circulation was deliberately made available to the public in good faith and to demonstrate transparency. It is to show the gentleman nature of Hon. Oladipupo Adebutu who is willing and ready to replicate such gestures with the good people of Ogun State.

“We are aware that election period will come with different propaganda. Therefore, it is not surprising that the mischief makers are feeling the heat of their rejection from the good people of Ogun State which is evident in the several reactions and online wails of panic-stricken members of Ogun APC.

“It is reassuring that the good people of Ogun State have shown that they are learned and intelligent and could see through the fruitless efforts by Ogun APC yesmen to twist facts.

“At this juncture, we want to urge our friends in the media to always verify any information before publishing same so as not to betray the sacred ethics of credibility, balance, accuracy and objectivity in their reportage.

“Our Governorship and Deputy Governorship candidates are both successful businessmen with unquestionable characters. Their track records at the Green Chamber speak volumes of their achievements.

“We urge members of the public not to allow mischievous characters to misinform and mislead them in a bid to deny them of the right to vote into power our candidates who are the choice of the people.

“We again use this opportunity to assure that the Peoples Democratic Party (PDP) will engender a transparent and people-oriented government that will provide great relief for our people through good governance when voted in 2023 elections.”