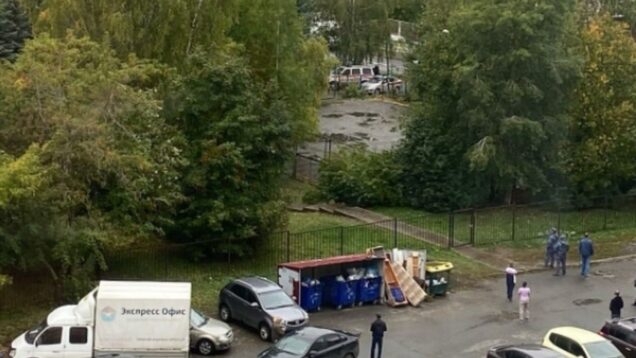 Security services at the scene of the shooting

A deadly shooting in a Russian school has left 13 people dead, including nine children and 23 others wounded.

The attacker, a lone gunman committed suicide after carrying out the fatal attack.

The motive for the shooting in Izhevsk, capital of the Udmurtia region about 970 km (600 miles) east of Moscow, was unclear.

The Udmurtia branch of the interior ministry said the body of the gunman was discovered by police at the scene.

Russia’s Investigative Committee identified the gunman as 34-year-old Artyom Kazantsev, a graduate of the same school, and said he was wearing a black t-shirt bearing “Nazi symbols.” No details about his motives have been released.

The governor of Udmurtia, Alexander Brechalov, said the gunman, who he said was registered as a patient at a psychiatric facility, killed himself after the attack.

Brechalov said nine out of the 13 victims were children and so were 20 of those wounded.

Earlier, Russia’s Investigative committee said seven adults were among those wounded and seven out of 13 victims were children. The conflicting statements could not be immediately reconciled, according to AP.

In May 2021, a teenage gunman killed seven children and two adults in the city of Kazan.

In April 2022, an armed man killed two children and a teacher at a kindergarten in the central Ulyanovsk region before committing suicide.