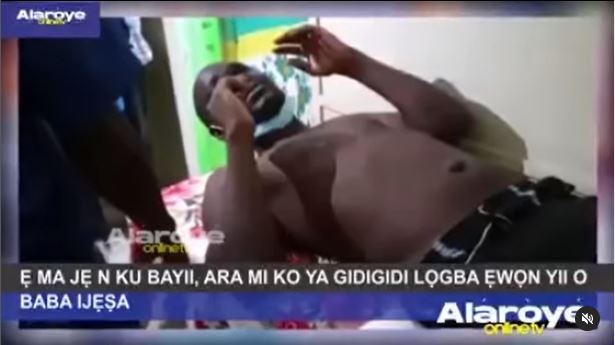 Embattled actor Olanrewaju James better known as Baba Ijesha, has cried out from the hospital bed over his ailing health.

The disgraced actor, who was convicted of rape in July, revealed that he has been battling a serious and deadly ailment in prison, which has deteriorated his health.

In a video by Alaroye Online TV making the round on social media, Baba Ijesha appealed to Nigerians that he doesn’t want to die.

The actor in the video which was recorded in Yoruba language begged Nigerians to save his life as he is suffering from a crime he is innocent of.

He went on to call on God to judge comedian, Princess who accused him of defiling her adopted daughter.

“I am battling a very serious and deadly ailment here in prison which is deteriorating my health. Please I need help. I don’t sleep or eat well anymore. I don’t want to die here. I am suffering for what I know nothing about. The Almighty God will judge Princess for lying against me that I used to deflower her daughter.”