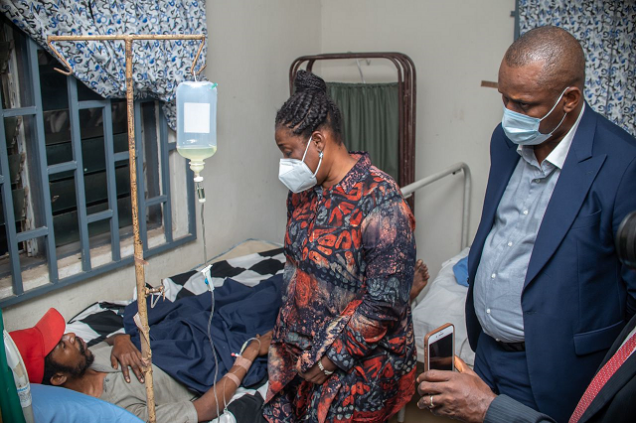 Edo State Government has instituted a gender-based violence case against the mother and siblings of a visually-impaired man, Lucky Osarenkhoe, over alleged inhuman treatment they meted on him.

The victim was reportedly beaten, locked up without food in the family house for seven days and left to die over his alleged refusal to connive with them to sell a house belonging to his sister based in abroad.

Wife of the State Governor, Mrs. Betsy Obaseki, disclosed this on Tuesday when he visited the victim at the Oredo Primary Health Centre in Benin City, where he is currently receiving medical attention.

The Edo First Lady who condemn in strong terms, the action of the family members, said they will be made to face the full wrath of the law.

She said when she heard about the case, she insisted that the victim be rescued immediately, adding that the case is now between the State Government and the family of Mr. Lucky Osarenkhoe.

The State Gender-Based Violence Management Committee has since mobilized a team to rescue the visually impaired man on Monday and is currently recuperating under the care of the Committee at the Oredo Primary Health Centre.

The State Commissioner for Youth and Gender, Mr. Andrew Ewanta, accompanied Mrs. Obaseki to see the victim at the hospital.