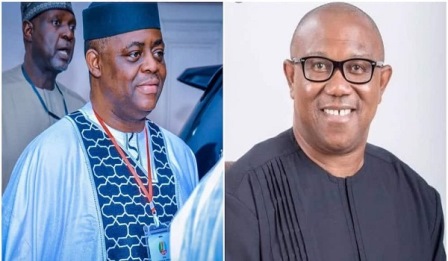 Former Aviation Minister, Femi Fani-Kayode has attacked Labour Party’s presidential candidate, Peter Obi for over comment that those affected by ASUU strike are children of the church.

He posted a video on his Instagram page where Obi appeared to be addressing some church leaders, where he said those being affected by the strike and being kidnapped and killed were Christians.

Fani-Kayode reacted to the video by saying: “Really? Even by Peter Obi’s standards this is low. How insensitive, wicked and irresponsible can you be?

“Are you so desperate for power? I wonder how your running mate, who is a Muslim, feels about this? I wonder how your Muslim supporters feel about it? Is it only Christians that have been killed and kidnapped by terrorists and that are affected by the ASUU strike?

“Why do you thrive on deceit and division? Can’t you just grow up and stop trying to set Nigeria on fire? Yes Christians have suffered but Muslims have too. Even the atheists, agnostics, pagans and the practitioners of the traditional religions have suffered too.

“If you want to lead this country you must speak for ALL and protect ALL and not just members of your own faith. Please stop using religion to achieve your objectives and do not push our country into a religious war because we have no other. You are not only a deceitful liar but you are a danger to the peace and unity of Nigeria.”

Fani-Kayode added: “Some of us spoke up for Christians when we were being treated unfairly and when we were being persecuted and we paid a heavy price for it willingly. And if needs be we would do it all over again without restraint or hesitation.

“You only started speaking up for Christians after you declared your interest in running for the Presidency. Up until then you despised and showed contempt for every Christian in this country except for those that shared your Catholic faith.

“As Governor of Anambra you persecuted both non-Catholic Christians and Muslims. This newfound attempt to be champion of our holy faith cannot and will not work and it is deeply insulting. Worse still you are the least qualified. You do not have the heart or courage of David and the Church cannot be used as a vehicle to achieve political power.

“It is much too important and much too pure and holy for that. The mother Church is our strength and shield and our clerics are the servants of the Living God. We love and respect every singe one of them. Stop attempting to use them for your dirty, abusive and divisive brand of politics.”