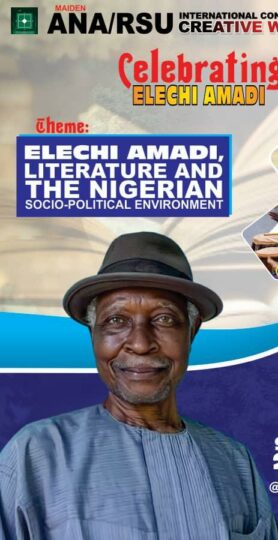 Association of Nigerian Authors, ANA in partnership with the Rivers State University over the weekend organised at a two-day International Conference in honour of late literary giant, Captain Elechi Amadi in Port Harcourt.

With the theme, Elechi Amadi, Literature and the Nigerian Socio-Political Environment, the two-day international conference featured paper presentations, rendition of poems and critiques of numerous works of the late author by literary scholars, essayists and researchers drawn from institutions of higher learning across the country.

While delivering his opening remarks at the conference held at the hall of former senate building of University of Port Harcourt, Vice Chancellor of Rivers State University, RSU, Prof. Nlerum S. Okogbule asked Nigerian writers to use their creative talents to project ills that have become endemic in the country and proffer solutions to them.

Okogbule said writers and authors in Nigeria now have the great burden of redirecting the focus of Nigerians to how to get the country out of the woods.

The Vice Chancellor challenged African authors to respond to the changes in the society without necessarily foregoing the aesthetics and entertainment in their works.

He also commended ANA for honoring the late late literary icon with an international conference.

The Vice Chancellor added that the University gladly bought into the idea of partnering with ANA to honour the late author because of his contributions to the literary world and the impeccable character he displayed during his years in public service.

In his goodwill message to the event, Dr.Wale Okediran, Secretary General Pan-African writers Association, PAWA described Amadi as a “Master of details, a cool headed storyteller.”

He added that “Amadi blurred the lines between traditional and modernity in his works. I am always delighted by the clarity and directness of the elegant pages of many of his works”.

Okediran said the creativity displayed by Amadi in his works made him to become a staple in many Literature classes in Nigeria and the world over and he will remain so for a long time to come despite his passage.

On his part, the President of ANA, Camillus C. Ukah, commended the Rivers branch of the association and the Rivers State University for organizing the conference in honour of Elechi Amadi.

“At a time when our country is troubled by divisiveness and toxic politics, we all have to learn from the efforts of RSU and ANA. Both bodies have called us all to a place of conversation on the role of literature in our sociopolitical environment. It is also proper that the iconic Elechi Amadi is at the center of celebration in the conference,” Ukah said.

He urged ANA to ensure that there is mutually beneficial partnership between it and RSU so that the conference can be sustained for many years to come.

In his remarks at the event, the President-General of Ogbakor-Ikwerre ethnic nationality worldwide, Prof. Nyeche Emenike Wami said the Ikwerre people are happy that one of their own who is literary icon was being remembered and honoured by ANA and RSU.

He pleaded with the Rivers State University to immortalize the late writer by establishing a Centre of Excellence named after him.

He said reading through Amadi’s works like The Concubine, The Great Ponds, Sunset in Biafra, etc, stand him out as a literary giant.

“Even in his public life, Elechi Amadi was a man of integrity and a man of many parts. He taught, Mathematics and Physics in his lifetime because he was also Science inclined.”

Prof. Kontein Trinya of Department of English and Communications Ignatius Ajuru University of Education, Port Harcourt after dissecting the works of the late author poured encomiums on him.

He described Amadi among other things, as “one of best storytellers who is able to arrest the attention of his audience and brings aesthetics into his works”.

In his Lead Paper, Associate Prof. Isaac Eyi Ngulube, of the Department of English and Literary Studies of Rivers State University stated that a careful study of Elechi Amadi’s works will reveal some similarities to the works of late literary giant, Chinua Achebe.

“However, Elechi Amadi insisted that in spite of the fact that Achebe was his House Prefect in Government College, Umuahia, the only similarities in their works are in the proverbs, but his works are unique,” he added.

Adi Wali, Chairman of ANA, Rivers State, told our correspondent in a exclusive interview that the Association, in partnership with the Rivers State University, decided to hold the International conference Amadi, who he described as a ‘prominent son of Rivers State’ to immortalize him and his literary works.

He said the uniqueness of the personality of the late literary giant is that he is multifaceted.

“Besides being a very creative Storyteller gifted in the use of flowery words to weave images in his numerous works, Elechi Amadi was once a teacher of Physics and Mathematics because he studied Sciences. Coincidentally, he attended the same Government Secondary School, Umuahia like the late novelist, Chinua Achebe. Achebe was his House Prefect”.

Wali hinted that plans are afoot to organize another international conference for the late Playwright and Ogoni Environmental Rights Activist, Ken Saro-Wiwa, who was once the President of ANA next year.

“The late Ken Saro-Wiwa impacted on his immediate and global audience first as renowned literary person before his environmental rights activism in Ogoniland and Niger Delta for which he was gruesomely murdered”, Adi Wali said.

Certificates of participation were presented to conferees at the end of the two-day programme.