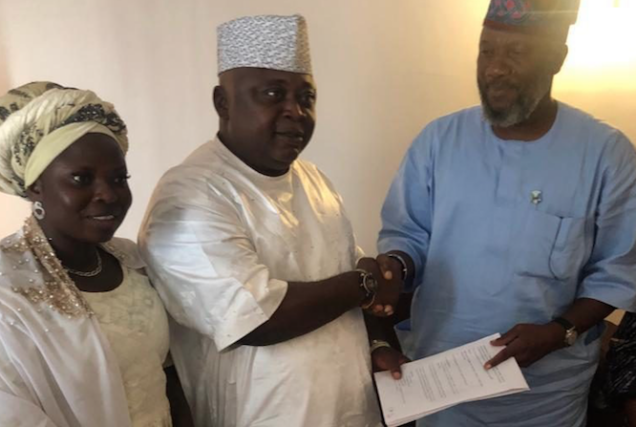 Seyi Bakare, a public affairs analyst, condemns the proposed power-sharing arrangement, post-2023 election, between the Peoples Democratic Party governorship candidate in Ogun State, Oladipupo Adebutu and his running mate, AbdulKabir Akinlade. In other words, there is a question mark on how they intend to share political positions among their cronies.

Long before the fall of Nigeria’s First Republic, the inimitable poet Christopher Okigbo deplored the rapacity, chicanery and primitive acquisitiveness widespread among Nigerian politicians. In A man of the People, a novel that proved quite prophetic, Chinua Achebe had equally signposted the implications of the politicians’ massive corruption and betrayal of the people and their quest for Independence. In his landmark poem Hurray for Thunder, the man widely acknowledged as Nigeria’s greatest poet wrote: “Already the hunters are talking about pumpkins/If they share the meat let them remember thunder.” Well, the politicians intent only on “sharing the meat”, the people’s patrimony, couldn’t be bothered: they kept plundering the public till and living criminally ostentatious lives until the hurricane of military coup consumed them. Sadly, in Ogun State, decades after, the same sharing practice that Okigbo and Achebe deplored is staring Nigerians in the face, and with reckless audacity.

Nigerians and the people of Ogun State were left stunned and completely dazed last Friday when documents surfaced on social media showing how the Ogun State governorship candidate of the Peoples Democratic Party (PDP), Honourable Oladipupo Adebutu and his deputy governorship candidate, AbdulKabir Akinlade, intend to share political positions among their cronies. The document, audacious in its blatant presentation of political commerce and corruption, is titled ‘Alliance Agreement between Hon. Oladipupo Olatunde Adebutu and Hon. Adekunle AbdulKabir Akinlade in respect of the 2023 Election Into the Offices of Governor, Deputy Governor, Related Elective Positions and Appointment in Ogun State”. It was dated September 16, 2022, and deposed to by an oath at the High Court of Ogun State, Abeokuta, with the State PDP chairman, Sikirulai Ogundele and one Sunday Solarin as witnesses. It proposes that if the two political buccaneers win the 2023 governorship election in the state, the deputy governorship slot of the party, Ogun West senatorial ticket and two State House of Assembly tickets in Ogun Central, would be conceded to the Akinlade group, a group populated by loyalists of the immediate past governor of the state, Senator Ibikunle Amosun.

Upon the emergence of Adebutu as the winner of the governorship poll, says the unethical deal, seven substantive commissioner slots;15 Special Adviser slots; 20 Senior Special Assistant slots; 20 Special Assistant slots; five Statutory Board Chairman slots and five local government executive chairman slots would be conceded to Allied People’s Movement (APM) and APC factional members. And Akinlade, besides his constitutional role as the deputy governor, “shall be appointed as the Commissioner for Trade and Investment in a ministry that shall be created to drive investments, improved revenue growth, and development of the state”. This is, of course, an afterthought meant to give the impression that the parties have an interest in trade and investment. The deal then introduces mere rhetoric, saying that “the deputy governor shall report directly to the executive governor by extant laws about his official duties and functions of his office as deputy governor and honourable commissioner for trade and investment,” as if deputy governors were not required to report to governors!

Naturally, as the political environment in the country gets charged and intense, so many strange developments will spring up, but not even the most audacious of fraudulent politicians are expected to assail the public with the barefaced cronyism and corruption that the authors of the horrendous deal have hatched in their desperate bid to reap where they have not sown and turn the people of Ogun State into their cash cow. Instructively, the PDP duo are not talking about how to bring development to Ogun State. They are silent on how to build infrastructure. They are not talking about how to improve education, and neither are they articulating how they intend to improve health services. They are not talking about how to change the face of things in the state. Their focus is on how to share state positions regardless of merit and competence. Now, if anyone had doubts that only very few politicians have altruistic motives, that doubt has been cleared up by the Adebutu/Akinlade deal. The truth is that many of those aspiring for elective positions are merely enticed by the resources of the state they intend to govern and the allure of office. They want to be called His Excellency while doing nothing excellent for the people, and while being, for all practical purposes, agents of sleaze.

The Ogun people must be thankful that these people have shown their true colours early enough: they must dodge a bullet. The people should be wary of and run away from, political merchants. Their agenda is perverse; their focus is not on alleviating people’s pain. They are political pirates. These kinds of individuals should not be allowed to smell power. They do not even have the basic courtesy of obtaining power first before thinking of how to share positions among cronies! To be sure, it would have been legitimate if they had struck a deal to attract investments to Ogun State. But no, they are the attraction they seek. It is ridiculous how they intend to share power: their scheme has no place for brilliant, competent and dedicated Ogun indigenes who can add great value to the state as commissioners or special assistants. It is all about themselves: their vision is all about self and self alone.

The real objective of these fellas is to change the trajectory of development being witnessed in the state currently under Governor Dapo Abiodun in all sectors and replace it with cronyism and nepotism. The Yoruba call this apapin (to kill and share!). Apapin is the work of butchers. There is no economic blueprint associated with them but the present administration’s ISEYA mantra/blueprint is known to all. Ogun State is known for enlightenment and excellence, not piracy.

Let’s return to Hurray for Thunder. Okigbo wrote: “The eye that looks down will surely see the nose,” and the Ogun people are urged to take this rendition of a Yoruba saying very seriously. They should choose their next governor with care. The current governor fits the bill: “The finger that fits should be used to pick the nose.” Political merchants can only plunge Ogun State into the depths of hell.