Women must unleash their potentials in moving Nigeria forward - Sanwo-Olu 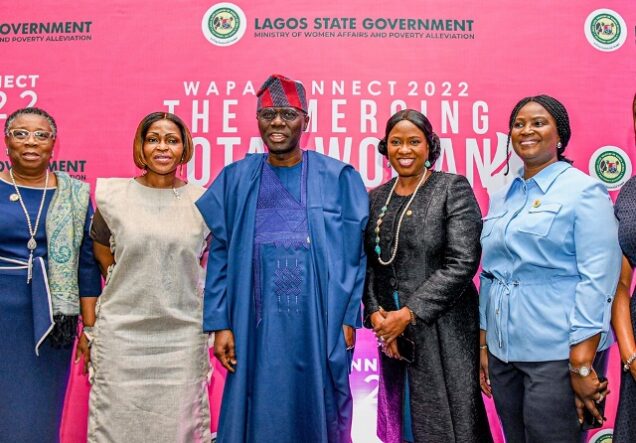 Lagos State Governor, Babajide Sanwo-Olu on Tuesday called on women to be determined to overcome stereotypes and unleash their potentials to contribute to moving society and humanity forward.

The governor spoke at the WAPA Connect 2022 conference with the theme,’ The Emerging Total Woman’’ organised by the Ministry for Women Affairs and Poverty Alleviation.

He also stressed the need to ensure that responsibilities and opportunities are given to people irrespective of whether they are born male or female, saying advancement of gender policies would help to achieve Sustainable Development Goals (SDGs).

The governor said the conference was initiated in pursuance of his administration’s commitment to optimally harness the potentials of both the male and female genders knowing fully that this was the sure path to attaining our full growth and development potentials as a state.

“It is also a testament to the policy of inclusiveness which our administration is strongly committed to upholding. The adopted theme of this year’s conference “The Emerging Total Woman” speaks to the changing dynamics driven by the new thinking of the 21st Century as well as the new challenge women have to overcome to play the role expected of them conscientiously.

“The emerging woman the world is craving is one that is self-aware and determined to overcome stereotypes and unleash her potential to contribute her fair quota to moving society and humanity forward,” he said.

Sanwo-Olu added that his administration was determined to support, inspire and encourage young emerging women to arrive at their destination against all odds.

According to him, it was important that that women accepted this responsibility to guarantee a better future in a socio-economic ecosystem that is increasingly becoming more competitive.

“As a government that is committed to improving the welfare of women and raising their capacity to become self-sufficient and self-reliant, we have, in the past three and half years, developed and implemented initiatives, policies and programmes that have directly benefited women in the state.

“Our administration has done so much to create opportunities for women while also promoting gender equality through the initiatives and programmes being implemented by relevant government agencies particularly the Ministry of Women Affairs and Poverty Alleviation,” he said.

Commissioner for WAPA, Cecilia Bolaji Dada, said the WAPA Connect was one major platform, through which the Ministry of Women Affairs and Poverty Alleviation significantly touched the lives of women annually.

Dada explained that the conference had become a reverence point to women advocacy on development.

She said the programme would offer the template for strategic thinking towards gearing women to change, even as it evaluated their rights to economic resources, access to sexual and reproductive well-being, and viable tools for socio-economic growth of Lagos State.

“Women play pivotal roles to achieve epochal significant financial statuses, that would certainly boost the economy along the diverse roles, which they play as managers, nurses, teachers and wives in their respective homes,” she said.

The commissioner stated that women played a vital role in shaping the society, across social, economic and political levels.

She added that the empowerment of women and girls was a pertinent key for the achievement of other United Nations’ 2030 Agenda targeted at the Goal 5 under Sustainable Development’s agenda.

“Gender – Equality is not only a fundamental human right, but a necessary foundation for a peaceful, prosperous and conducive world ultimately; development will only be sustainable, if its benefits accrue equally to both women and men.

“The woman plays a crucial and central role in shaping the society across social, economic and political levels. It has been said that the empowerment of women is central to all initiatives, in order to achieve sustainable economic, social and environmental development,” she stated.

The conference featured a panel of discussions on topical issues critical to solving challenges women are facing in contemporary time.

She said: “Bringing more women out of the prevailing socio-economic situations will give them more freedom to improve their livelihoods and contribute their quota towards growth of our State. This would place Lagos on equal pedestal with societies where women flourish.”