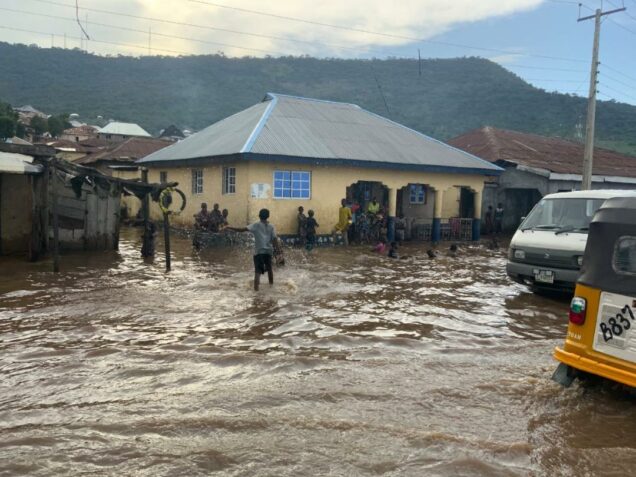 Exactly ten years after a massive flood submerged several communities in Kogi State, the waters have returned to wreak more havoc. The flood has sacked people from their houses and destroyed invaluable properties including crops and farmlands.

Lokoja, the State capital and Confluence of Rivers Niger and Benue on Saturday night saw the rivers overflowing their banks. By Sunday morning not a few people have been forced out of their houses to lodge with sympathetic friends or relations. Those not lucky to have such privileged relations relocate to refugee camps.

As of Tuesday, a government source revealed that about fifty rooms have been prepared in earmarked schools to house some 10,000 victims. Camps are being opened for Internally Displaced Persons, IDPs to mitigate the effects of the disaster.

The most affected communities are in Lokoja, Bassa, Kotonkarffe, Ajaokuta, Ibaji, Ofu and Idah Local Government Areas. Victims of the flood have been counting their losses.

Some victims were seen clutching their water-soaked bags and walking briskly in a drizzling rainfall on Tuesday. Apart from the torrential downpour of a fortnight, the waters are emissions from the overfilled Ladgo Water Reservoir in far away Cameroon.

The flood has taken over a portion of a major road in Kabawa and another in Ganaja village, two major interstate connections. Many travellers were forced to ply the pothole-ridden Zone 8 / Crusher Road to access or exit the ever-busy and equally threatened Lokoja /Abuja highway.

Motorists to or from the Eastern part of the country were forced to endure long agonising hours in Ganaja village. Scores of trailers have been stranded on both sides of the road, with the drivers enduring many nights of immobility.

Some travellers are luckier. The desperate commuters disembark and join among several canoes on brisk business, across the flooded plains. When they cross to the other side, they promptly join another vehicle in continuation of their journey.

The canoe paddlers are also believed to be benefitting dubiously from the woes of victims. This is how. They are said to raid movable properties which the victims abandon while fleeing from the waters.

Yinusa Abu, a victim who hurriedly fled his house in the Adankolo area of Lokoja on Monday night claimed that his hanger, bed and other properties had been stolen, when he returned with the hope of packing them to safety the following day.

Listen to him. “Only someone with a canoe could have done this. They have stolen the things I left in my room when I fled. This is too bad, benefitting from this type of misfortune. Where will I start from?”

A distraught single mother, Kehinde who was waiting for a tricycle to move her remaining belongings said her concern was how she will survive. “I don’t even know what to do…” She said.

Commissioner for Environment in the State, Victor Omofaiye who along with others inspected facilities at St Paul Primary School, Adankolo IDP Camp called for help from the Federal government, individuals and Non-Government Organizations, and NGOs. He said the flood was massive noting that the government was yet to ascertain the extent of damage or loss.

He said a necessary awareness campaign was earlier carried out to warn people living in flood-prone areas to relocate. He regretted that most of them ignored the warnings.

“For now, we cannot ascertain the level of destruction, but I want to let you know that it is massive. Farm lands have been submerged and properties worth millions of Naira destroyed.

“Based on our communication with the Nigeria Hydrological Services Agency, the Lagdo dam operators in the Republic of Cameroon commenced the release of excess water from the reservoir by September 13.

“We are aware that the released water cascades down to Nigeria through River Benue and its tributaries, thereby inundating communities that have already been impacted by heavy precipitation.

“The released water complicates the situation further downstream as Nigeria’s inland reservoirs, including Kainji, Jebba, and Shiroro, are also expected to overflow between now and October ending, according to Nigeria Hydrological Services Agency.

The agency also urged governments of the affected states to identify safe areas for evacuation, as well as make provisions for food items and other emergency response measures.

Spillage from the Cameroonian Dam is no longer strange in Nigeria. In 2012 it accounted for the death of more than ten persons and the hospitalization of several others. Crocodiles and other dangerous amphibian reptiles flowed with the water in some Nigerian cities. Residents of Lokoja claimed to have seen a dual-headed snake on that occasion.

Built between 1977 and 1982 by a consortium of Chinese and Cameroonian Engineers, it. planned to bridge the power, irrigation and potable water needs of the country.

There is an understanding of information sharing about the operation of the reservoir between the two countries. However, in 2019, Nigeria accused Cameroon of opening the dam without honouring the MoU.

Apart from the release of water from the dam, the inflow of flood from the countries and the extended cessation date of local rainfall may lead to extensive flooding in Nigeria.

For Kogi, it is a replay of the flood experience it had one decade ago. That was towards the end of September 2012 when the flood also sacked many communities, almost causing a humanitarian disaster.

Then President, Dr Goodluck Jonathan was on a sympathy visit to the state and addressed the victims. The then Governor Captain Idris Wada also took proactive steps to manage the effects of the floods.

The sensitization campaign was intensified to help people relocate to safer places and rake support from donor agencies. A United Nations agency, UN-Habitat, Africa’s richest man and business magnate Aliko Dangote were among generous donors to the victims.

Makeshift houses were erected in IDP Camps across the state. Food and healthcare facilities were also provided for the victims. The most enduring legacy of that period was the construction of the 500 units Post-flood Housing Estate behind Old Poly Quarters, Lokoja.

For the victims, now that the waters have returned the big question is where will help come from?