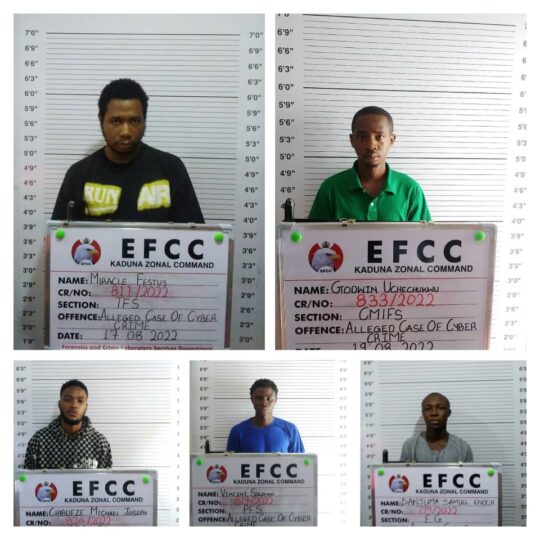 The one count charge reads: “That you, Vincent Solomon, ‘M’ sometimes in July, 2022, in Kaduna within the jurisdiction of this Honourable Court, did attempt to commit an illegal act by using Austin Sparky Renforth of United States of America Infantry Marine, a false identity on Instagram account with the intention of defrauding unsuspecting persons and you thereby committed an offence contrary to Section 57 of the Penal Code Law, 2017 of Kaduna State and punishable under Section 309 of the same Law”.

The defendants pleaded guilty to their respective charges, when they were read to each of them separately.

Upon their guilty pleas, prosecution counsels: P.C Onyeneho, E.K Garba and M. Lawal prayed the court to convict and sentence them accordingly but defence counsels: Emmanuel Nwokenekwu, Nazif Shehu, and Chinedu Gwam, Mahe Sani and I.S. Yahaya prayed for mercy of the court for the defendants, saying that they are remorseful.

Justice Bello, thereafter, convicted and sentenced Solomon to three months imprisonment or a fine of N150,000. He also forfeited the Iphone XR he used to commit the offence to the government.

Festus was convicted and sentenced to three months imprisonment, with an option of fine of N100,000. He forfeited an Iphone 6s used to commit the offence to the government.

The convicts started their journey to the Correctional Centre, when operatives of the Kaduna Zonal Command of the EFCC arrested them at various locations in Kaduna State, for internet- related offences. They were subsequently prosecuted and convicted.