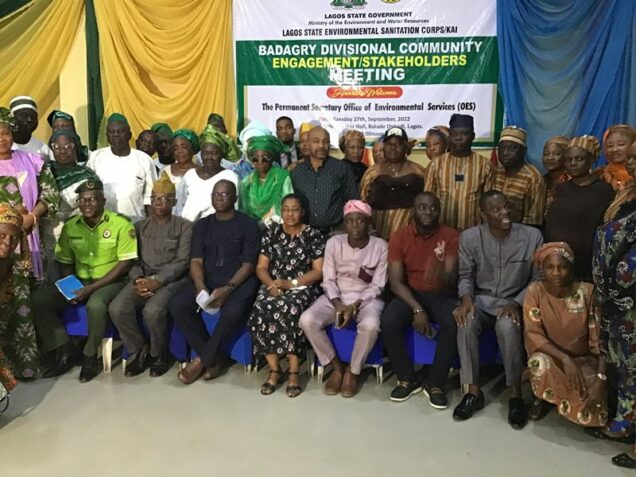 CP Gbemisola Akinpelu (Rtd), top government officials and others at the event

The Lagos State Government has charged Local Governments in the state to partner with it to stop touts and unathorised personnel from establishing illegal markets in their domains.

Tajudeen, who was represented by a director in the office, Bolade Fasasi, said the constitution of designated markets in the State fell under the purview of Local Government Councils.

“In this vein, we implore our councils to be partners in progress and not give room for touts and unauthorised personnel to establish illegal markets, which contribute largely to littering of roads and blockage of drainages and canals,” he said.

He stated that the Heads of Sanitation Departments in LGAs and LCDAs under coverage in the Badagry division of the State should renew their partnership with the agency in ridding the State of environmental nuisances in the appropriate residential and public areas as part of a cogent collaboration.

“Voluntary compliance can be achieved through massive advocacy on traditional and new media and we have the Public Affairs Unit to thank for spreading the word on television, radio and social media. The Unit has jacked up the Agency’s advocacy drive and the assurances of the Ministry’s increasing support,” he added.

Tajudeen enjoined the State Market Board under the Ministry of Local Government and Chieftaincy Affairs to spread the gospel to markets on the need to keep the designated market environs clean, patronise approve LAWMA-PSP operators and not encroach on the road setbacks.

“In addition, our markets are important when it comes to fruitful conversations like this, being that the excos of the National Association of Commodity Market Men and Women (Badagry division) would understand more about the rules of engagement covering the operation of markets in the State is against the encroachment on walkways, lay-bys, setbacks, pedestrian bridges, road verges, medians, kerbs and gutter slabs in a bid to display wares for sale.

“Hawking, street trading, indiscriminate dumping of refuse in drains, gutters, canals, refusal to pay LAWMA-PSP waste bills by public and private buildings is a punishable offence and thus remains enforceable by KAI and other relevant agencies,” he added.

The Corps Marshal, Lagos Environmental Sanitation Corps (LAGESC/KAI), CP Gbemisola Akinpelu (Rtd), whose office convened the meeting, said the theme of the interactive session is ‘Voluntary Compliance for a Greener Environment’ which is quite important as relevant stakeholders from the LGAS, LCDAs, Badagry markets’ executives and the State Market Development Board were gathered to deliberate and proffer solutions to improve service delivery with regards to its mandate of maintaining a hygienic, cleaner environment and reducing environmental infractions to the barest minimum in the State.

“It is important to note that this stakeholders’ meeting will serve as a platform in providing solutions to maintaining a high level of hygiene in Lagos environs and obey the State’s environmental laws to achieve in tandem with the T.H.E.M.E.S agenda of Mr. Governor, Babajide Sanwo-Olu’s Cleaner and Greener vision,” she said.